We caught up with Bob Michaels, senior vice president of worldwide sales at ZeeVee from his office in Connecticut yesterday and found out that the company will be opening an office in the U.K. this September, ZeeVee’s first outside of the U.S.. 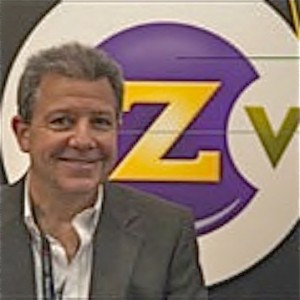 “We’re running ragged, but I’m not complaining,” says Michaels. “Business is booming. In fact, I’d judge that we are up 60% in the last three months.”

ZeeVee brings multiple channels into basic TV screens, with no hardware behind the screens and using a minimal number of boxes, all through the coaxial cable that most large buildings: hospitals, student residences, sports bars, arenas, assisted living facilities, retail outlets and more.

To quote the company’s website, ‘ZeeVee HD/SD encoders and RF modulators convert video sources such as satellite receivers and digital signage players into digital cable channels that are broadcast over existing coax cabling to an unlimited number of HDTVs.’

“We can send 134 HD channels on one coaxial cable,” says Michaels. “We can handle any number of screens and over any distance. We just brought in 48 channels at the University of Utah, and 47 to Fenway Park in Boston. And we’ve seen 70-to-80 screens in some casinos.”

Michaels says that, rather than hurting the business, the current economy is actually helping ZeeVee.

“ZeeVee allows the use of existing coaxial cable so it saves on costs of new wiring, labour; there’s a need for less boxes, no hardware; and basic HDTVs bought at any store can be used. So these make our system much more affordable.”

The company has been doing extremely well in the U.S. and Canada. The new U.K. office will be to further develop the European and Middle Eastern markets where ZeeVee already has some clients.

The company sells through integrators. Michaels joined the six-year-old company a year and a half ago. It is backed by two private equity firms and senior management,

This entry was posted on Wednesday, July 17th, 2013 at 08:00 @375 and is filed under DailyDOOH Update. You can follow any responses to this entry through the RSS 2.0 feed. You can leave a response, or trackback from your own site.