If you’ve seen an oversized, blue robot-like character dancing around in some of mid-Montreal’s public settings such as McGill University campus, Dorchester Square and Place des Arts, you needn’t be alarmed 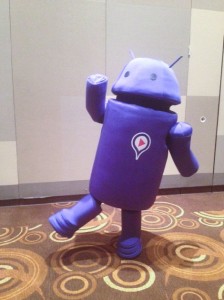 The friendly character is Screenie Sinclair – affectionately only referred to as Screenie – BroadSign’s new mascot that we’ll be seeing a lot of in the future. Screenie speaks very faintly in both English and French, and, while the company refers to Screenie as ‘he’, we have it on good authority that it was a lady who taught him to dance.

Daniel Parisien, BroadSign’s vice-president of marketing and strategy, “Residents of Montreal can rest assured that what they have seen is in fact a member of the BroadSign family. He originated in Montreal and is the physical embodiment of all that BroadSign represents, from our driven and innovative nature to our leading-edge ideas and slightly cheeky personality. And for the record, Screenie is a superb shade of BroadSign Blue.”

Screenie’s first trip across the border was to Las Vegas in February 2013, where he made his debut to external BroadSigners at BroadSign’s First Annual Client Summit held prior to Digital Signage Expo 2013. As we didn’t attend that Summit, we didn’t have the chance to meet him earlier.

We expect to see Screenie captured on camera during each video of an upcoming new BroadSign initiative that is soon to go live: a series entitled ‘The Basics of BroadSigning with Daniel Parisien’. In each film, Parisien will address a trending topic in the digital place-based industry and deliver predictions as to what the matter means to the Digital Out-of-Home space. We’ve heard several of the topics and some sound quite futuristic-thinking. (The first three will tackle the Omnicom-Publicis merger, Android, and the DiSi Standard.) We also expect Screenie to add a light-hearted touch to each of the serious topics being tackled by Parisien. Filming of the first five episodes of the ongoing series has been completed.

The series will be available on BroadSign’s own website. To get to know Screenie in advance, you can do so by liking BroadSign on Facebook. By following on Twitter (#iseescreenie), you will be given updates as to Screenie’s travel schedule and upcoming media appearances. You can also friend Screenie on Facebook, as we’re told he’s keen to extend his social circle.

This entry was posted on Thursday, August 22nd, 2013 at 10:00 @458 and is filed under Scuttlebut. You can follow any responses to this entry through the RSS 2.0 feed. You can leave a response, or trackback from your own site.