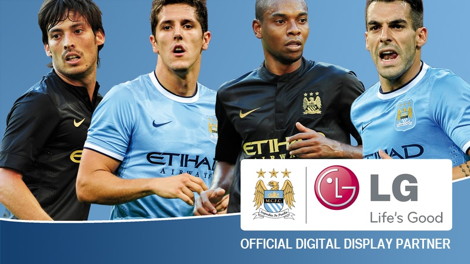 The two year deal will see LG provide display technologies to the Etihad Stadium – a process which has already started as the build-up to this season’s 2013/14 Barclays Premier League saw LG supply the Etihad Stadium with more than 360 displays, as part of a stadium-wide refit.

The screens, ranging from 22-inch to 47-inch, were installed throughout the stadium’s premium suites, hospitality boxes, fan concourses and food and beverage kiosks.

The announcement also stated that more than 320 flat-screens, which can be used as TV or digital signage, will also feature in the City Football Academy, the Club’s state-of-the-art training complex located on an 80-acre site next to the Etihad Stadium in the heart of East Manchester, which is due to open next summer.

As part of the partnership, LG will be permitted to use City players and the Club crest in advertising, packaging and point-of-sale across LG’s vast sales networks around the globe. In addition, LG branding will also feature in a range of advertising from the match day programme through to perimeter LED screens.

This entry was posted on Thursday, September 5th, 2013 at 10:51 @493 and is filed under Scuttlebut. You can follow any responses to this entry through the RSS 2.0 feed. You can leave a response, or trackback from your own site.