If you’ve been to Las Vegas, you can’t have missed it: Situated on The Strip, Branded Cities Network’s Harmon Corner Digital Screen is perhaps the world’s largest continuous full-motion HD LED display – and it now runs on the BroadSign X software platform from BroadSign International LLC, Montreal. 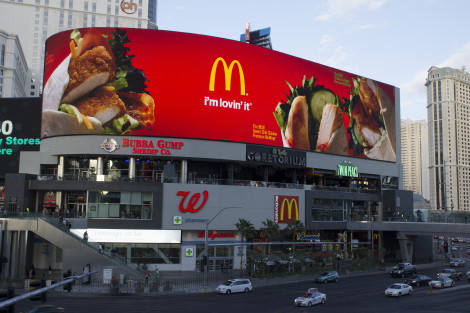 Measuring 60’ x 306’, the LED board is longer than the length of a football field and equivalent to the area of more than 27 typical highway displays.

“The Harmon Corner display offers endless potential for place-based consumer engagement, and allows brands to communicate with a consistently large audience around the clock,” says Scott Elliot, vice-president of sales at Branded Cities.

BCN already uses BroadSign’s content management software for some of its digital signage applications consisting of LED screens located in densely populated areas, such as the Denver Theater District, Los Angeles and the Las Vegas Strip. With the latter having attracted almost 40 million visitors in 2012, according to a 2012 report from the Las Vegas Convention and Visitors Authority, Harmon Corner is ideally situated to capture impressions from the Strip’s substantial daily vehicular and pedestrian traffic.

“We selected BroadSign’s platform to power Harmon Corner not only for its ability to distribute content to multiple platforms and provide precise reporting, but because their services department went above and beyond to develop a unique method of handling large format digital displays with pixel counts over 30 million,” says Elliot. “We could not be more pleased with BroadSign’s software.”

“Harmon Corner is one of the most visible and spectacular digital screens in the world,” says Skip Beloff, vice-president of sales at BroadSign. “The flexibility and high performance of the BroadSign X platform made supporting such a world-leading display an exciting challenge. Now BCN will be able to reap the rewards of the increased efficiencies and creative possibilities that make running on BroadSign so worthwhile.”

This entry was posted on Tuesday, September 10th, 2013 at 11:30 @521 and is filed under DailyDOOH Update. You can follow any responses to this entry through the RSS 2.0 feed. You can leave a response, or trackback from your own site.