International recording artist Lady Gaga has revealed the cover artwork for her new album, ARTPOP, in a piece-by-piece unveiling on Clear Channel Outdoor digital billboards and screens in major cities across the globe. 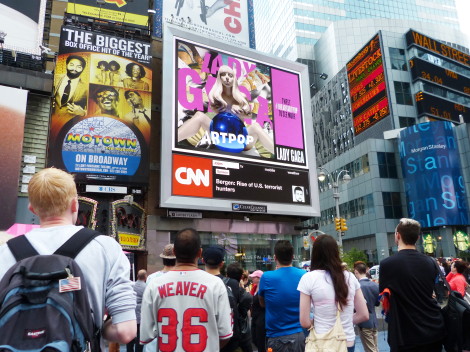 The company is pushing the boundaries of its international footprint and digital technologies with this first-ever out-of-home campaign that sequences a stepped reveal of advertiser creative in unison across the world. The campaign showcases the global scale, reach and impact of Clear Channel Outdoor’s digital inventory, which marries the oldest and most enduring advertising medium with the newest technologies to provide huge creative potential for brands to connect with people.

Beginning yesterday, Oct. 8/13 at 1pm EDT, in an exclusive multiplatform event, Lady Gaga, who is renowned for her social media savvy and massive following, asked her over 40 million ‘Little Monsters’ on Twitter and 59 million fans on Facebook to tweet and post about the upcoming album using the hashtag #iHeartARTPOP. Over the following 30-minute time-frame, ‘Mother Monster’ used Clear Channel Outdoor’s media to perform a digital tease of the album cover with a new portion revealed every few minutes until the artwork was fully displayed.

“Having Jeff create something for ARTPOP was a dream come true, and a very emotional experience,” says Lady Gaga. “He has given me the greatest gift and we are excited to be sharing it with you.”

Tweets from fans with #iHeartARTPOP were incorporated into the backdrop of the creative reveal, giving them the chance to become fully immersed in the collaborative art process and the opportunity to see their messages on Clear Channel billboards and digital screens, and on the Lady Gaga website. This marked what is believed to be the first time any musical and visual performing artist has collaborated with fans through social media to create an iconic, global moment around art in out-of-home media.

“Clear Channel Outdoor has a growing, vibrant network of high quality digital screens across the globe which gives advertisers a new and powerful, premium media portfolio to reach consumers,” says William Eccleshare, CEO, Clear Channel Outdoor. “With the rise of urbanization and the increasing dominance of mobile Internet and apps, out-of-home is an essential ingredient in media campaigns to communicate, engage and even transact with consumers. We are committed to delivering the full potential of digital out-of-home by providing our global clients with rich, creative and effective campaigns, so we’re extremely proud to be partnering with Lady Gaga to bring ARTPOP to the world in such an innovative way.”

To ensure that all fans worldwide are able to participate, Lady Gaga exposed her highly anticipated album’s artwork simultaneously in 18 cities across the globe while also streaming the live reveal at the website, direct from Clear Channel Outdoor’s Spectacolor billboard in Times Square located at 1567 Broadway. In demonstration of Clear Channel’s truly unique cross platform capabilities that include radio and digital in addition to out-of-home, Clear Channel Media & Entertainment radio stations across the U.S. also posted the album cover, once it was revealed, to their individual websites.

The screens in each city showing the reveal varied. eg. in Brussels over 100 screens covering the Metro stations across Belgium, including Brussels South, Brussels Central, Antwerp Central and Ghent saw the reveal, while super-sized billboards at the main entry and exit routes into Madrid, Barcelona and Valencia, Spain; La Vaguada in Madrid; Nuevo Centro in Madrid and Valencia were used.

This entry was posted on Wednesday, October 9th, 2013 at 10:01 @459 and is filed under DailyDOOH Update. You can follow any responses to this entry through the RSS 2.0 feed. You can leave a response, or trackback from your own site.