NCR Corporation has announced a four-year partnership with the Atlanta Falcons of the National Football League. 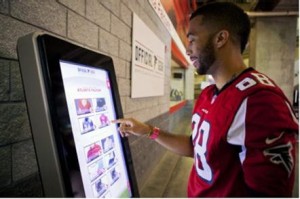 As part of the partnership, Official Falcons Gear, the Atlanta Falcons Retail arm, will use NCR Netkey Endless Aisle solution to allow fans on the main level of the stadium to order merchandise from designated NCR Express Zones and then pick it up any time they want before the game ends, dramatically cutting time spent waiting in line.

In addition, interns from Georgia Tech will use NCR’s leading POS Counterpoint software technology and mobile applications to allow suite holders the ability to make purchases during the game from the comforts of their suite and then have the merchandise delivered before the end of the game.

Furthermore, NCR Wayfinding interactive self-service solutions are installed at the stadium, to make it easier for fans to find their way around the large, multi-tier stadium with a touch of the finger.

“The Atlanta Falcons organization wants to provide Falcons fans with the best game day experience possible,” says Tim Zulawski, vice- president of sponsorship sales and service for the Atlanta Falcons. “With the help of NCR, we have an opportunity to make the selection, purchase and pickup of Falcons merchandise easier and more convenient for our fans.”

Across the stadium, NCR has installed 35 brand new registers; created eight express lanes with wight endless aisle kiosks accessible to all fans in the stadium; placed two other kiosks in VIP locations; and created mapping of the building for the first two preseason games that would allow for the introduction of wayfinding. It has also now installed 11 wayfinding screens, with eight being at the lower level gates, and has filmed a spot that articulates how to use the express lane.

NCR also worked with Ignify to have both the endless aisle and the CP Mobile be able to communicate to update inventory, which was vital to both platforms working. The company actually reworked each of the previous plans about 10 times as new ideas and challenges presented themselves. Other work included designing and creating the first official gear catalog; hiring and training the interns and putting them into action. It tested 30 suites for in suite ordering and delivery using CP Mobile before rolling the system out to 164 suites the ability to order in their suite and have merchandise delivered to their suite via CP Mobile. And it branded 16 ramp walls, 32 glass doors, 16 mats, 16 entry ways, 24 columns, two elevator spectaculars, 17 elevator doors, and four stairwells .

Tapping into the talented students at Georgia Tech, NCR is providing the students with an opportunity to work with the Atlanta Falcons. Students will learn the real-world complexities of integrating technology and marketing into business – on one of the biggest sports and entertainment stages that exist today.

NCR and the Falcons are also kicking off a series of programs for NCR employees and the community. Beginning in the spring of 2014, associates from the Atlanta Falcons Physical Performance Department will work with the NCR Human Resources Department to develop a wellness program specially designed for NCR employees.

And in the community, the Falcons will also partner with NCR on the tech giant’s first-ever Big Give, a company-wide initiative to unite its 26,000 employees around the world through volunteering and inspire the next generation through technology. The community effort also speaks to NCR’s overarching vision to make the everyday easier, and more exceptional, for people around the world.

This entry was posted on Wednesday, October 9th, 2013 at 14:00 @625 and is filed under Scuttlebut. You can follow any responses to this entry through the RSS 2.0 feed. You can leave a response, or trackback from your own site.