As part of a new 10-year agreement with OC Transpo in Ottawa, PATTISON Outdoor Advertising has developed the first ever station dominations promoting Rogers Digital TV NextBox 3.0 in two of the city’s Transitway stations. 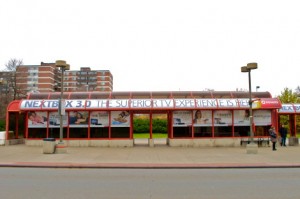 Promoting the leader in digital cable television in Canada, these two station dominations provide engaging opportunities for Rogers Digital TV that have never been experienced on Ottawa’s transit system.

The Transitway, with a weekday passenger volume of 240,000, is Ottawa’s rapid transit service covering over 35 kilometres and serving 57 stations. The Rogers Digital TV station dominations are located at the Transitway’s Hurdman and Lincoln Fields stations. Each station consists of extensive use of vinyl displays on glass components, with the Lincoln Fields station also consisting of stair risers.

In addition to the dominations at the Hurdman and Lincoln Fields stations, the Rogers Digital TV advertising campaign in Ottawa also includes Billboards and Double Decker Bus Murals. The campaign will run for six weeks ending on December 3, with the station dominations appearing for the final four weeks.

This entry was posted on Thursday, November 28th, 2013 at 15:00 @666 and is filed under Scuttlebut. You can follow any responses to this entry through the RSS 2.0 feed. You can leave a response, or trackback from your own site.