JCDecaux is expanding its Transvision network with the launch of a second screen at London Victoria Station. Part of JCDecaux’s investment in premium digital Outdoor, this second Transvision screen will strengthen JCDecaux’s London rail portfolio, underlining the importance of the South-East commuter audience to brands. 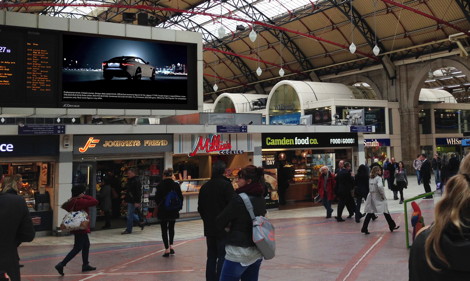 Delivering a weekly footfall of over 1.7 million, Victoria Station is the second busiest rail station in the UK and operates as two separate termini. The new screen will be located on the eastern side of the concourse, directly in front of a second experiential zone in the Station, facilitating campaigns that link screens to space, part of the offer from JCDecauxLive, the experiential brand at JCDecaux.

The addition will bring JCDecaux’s Transvision network to 23 premium screens in 17 stations in the UK, delivering a powerful communications channel for brands to access the affluent, connected commuter audience.

The addition is part of a planned network of 26 Transvision screens in the UK.

This entry was posted on Tuesday, April 8th, 2014 at 06:32 @314 and is filed under DailyDOOH Update. You can follow any responses to this entry through the RSS 2.0 feed. You can leave a response, or trackback from your own site.