Keeping Up with the Hockey World 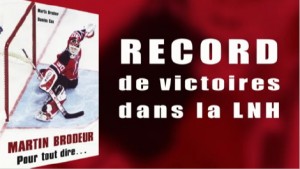 Three day’s earlier, the Montreal-born Brodeur, with a 3-1 win March 14 in hockey-crazed Montreal, had tied Roy’s record of 551.

The morning after Brodeur’s breaking the record, Vif TELE, with a network of 85 ATM screens in Quebec, was asked by the publisher of a biography on Brodeur to put an ad for the book on its screens. The book, Martin Brodeur Pour tout dire…. ,published by Les Editions au Carré, had already been in bookstores for several months, and vif TELE had run an ad for it for a month last year..

Within two hours of the publisher’s request, that ad was remade and up on screens in commercial environments and bank entrances – a real example of the speed and flexibility of digital signage and the vif TELE network.

Vif TELE’s 20” to 32” digital screens are above the ATMs in major shopping centres, office buildings, and other heavy traffic RBC Royal Bank branches in Montreal and Laurentian Banks across the Quebec province – generating more than 600,000 visits per week. The screens are labelled as VIF Tele and offer sound.

“We operate the only one commercial network in a bank environment in Quebec – probably in Canada,” says Benoit Johnson, founder and president of VIF Communication, Montreal. “We are different from the concept where banks advertise on their ATMs own screens. Our screens are above the ATMs and seen as part of the commercial environment.”

VIF also has digital screens into medical clinic’s waiting rooms in Quebec, under the name of Medik-TV, as an affiliate of the Canadian Health Media Network. PHSN Ltd., Toronto is the main affiliate of that network that is seen in close to 500 clinics in Canada.

This entry was posted on Monday, March 23rd, 2009 at 07:18 @346 and is filed under Scuttlebut. You can follow any responses to this entry through the RSS 2.0 feed. You can leave a response, or trackback from your own site.