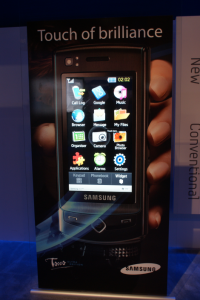 We visited the Samsung stand every day whilst we were at InfoComm – so much was there to see and we were keen to look at a number of the exhibits in a bit more detail (the bus shelter for example and the giant video wall).

This Samsung mobile phone retail fixture was tucked away in a corner but really caught our eye (in case you can’t get the scale from the photo it’s about human height).

Made up of course from a Samsung LCD, it was touch screen and attempted to re-create the user interface of one of their mobile phones.

It had a big footprint (it was in a big wooden box) and the outsides of the fixture could have been a bit prettier perhaps but it does show just how creative you can be with an LCD and some touchscreen technology.

This entry was posted on Friday, June 19th, 2009 at 18:10 @798 and is filed under Scuttlebut. You can follow any responses to this entry through the RSS 2.0 feed. You can leave a response, or trackback from your own site.