Most airports use individual monitors for ticket counters, but that’s not the case for Richmond International Airport (RIC) in Virginia. Two 4-millimeter LED ribbon video displays measuring 150 feet long each, designed and manufactured by Daktronics (NASDAQ-DAKT) of Brookings, South Dakota, now flank the ticket counter canopy to efficiently guide travelers through the airport. 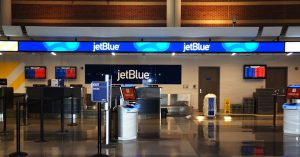 Russ Peaden, director of airport real estate and facilities at Richmond International Airport said “Our CEO wanted to upgrade and modernize the area to improve its appearance and sign each airline individually with queueing lanes. The funding came together, and we have a clean, fluid look that can change lines at any time.”

The full-color video ribbon displays were selected in consideration of the available space in the ticket canopy as well as the desired design aesthetics. The airport hired Gresham Smith and its consultants for architectural and engineering design services.

Eric Sweet, senior interior designer at Gresham Smith said “From a wayfinding point of view, the displays are far more intuitive. People are naturally drawn to light. With these displays, people can read content easier from a greater distance and almost instantly recognize the present airline brands by color.”

Daktronics is also creating custom content for the airport, which can be shown in segments to reinforce airline branding and call attention to available car rental companies.

Richmond International Airport (RIC) is one of the most modern airports in the eastern United States. Seven major airlines, Allegiant, American, Delta, JetBlue, Southwest, Spirit, and United, offer nonstop flights to major domestic destinations and connecting options to points around the world. Annually, the Airport welcomes more than 3.8 million passengers. The activities of RIC and its tenants create nearly 16,000 jobs and $2.1 billion in economic activity for the Richmond region each year.

This entry was posted on Monday, January 21st, 2019 at 04:59 @249 and is filed under DailyDOOH Update. You can follow any responses to this entry through the RSS 2.0 feed. You can leave a response, or trackback from your own site.