Why We Are Giving @BoardActive A Wide Berth

Luckily in our industry, which on the whole is very good and proper, there are still only a few people we give a wide berth to. Typically we look at a company, their product, solution or offering and the owners, management and people in that business and decide pretty quickly if we want to give them any press.

The issue at stake is that our blog is incredibly well read and with 13,200+ twitter followers to boot, even a criticism or mention of someone can give a company a boost – something which may not actually be deserving. If people are, in our opinion, talking rubbish we will typically call them out BUT then there are people that are so obviously talking themselves up and aiming to talk across people, muddy the waters etc. with the sole intent of creating their own news story. In those instances we have found from experience that it is best to ignore them – otherwise of course you give them exactly what they want, the “oxygen of publicity”.

Up until the last 24 hours, that ‘ignoring them’ was exactly the approach we took with Doug Pittman, Founder and CEO of BoardActive, a software company that says it enables brands to geofence any location, measure foot- traffic, and engage users with personalised messages when they enter designated areas. If you follow them on twitter you will know that Doug has made some pretty wild claims, one of the most recent was that his software could have rescued all the (retail) businesses that went bankrupt. He’s loud, in your face and personally we think, well over the top. Anyone who has been in this industry these last 10-12 years will have met someone like him. They usually make wild claims and come and go. So, as stated earlier we figured it was best to leave well alone and ignore. Well up until today anyhow.

Yesterday (Wednesday November 13, 2019) after an industry guy that we knew slightly from old, actively engaged us in what started off as a polite, private discussion about Doug and BoardActive, we received the following nasty and threatening letter from Doug Pittman himself.

Make those slanderous and libelous comments and the run Adrian… LOL

So here goes….If I hear or see one more negative word from you from ANYONE Adrian ….it will be on.

I’ve been nothing but kind to you up until now …..And you showed you’re nothing more a COWARD and a CHILD by deleting me on LinkedIn. Bullies like you hate getting punched back, don’t ya ….. I punch back very HARD.

Now, my attorney will be in touch……

I don’t need trash outlets and worthless blah writers like you…..watch what’s happening in a few days with our announcement. So much for your “Dangerous AND Deluded” slander and libel comment.

Sent VIA my iPhone

Now remember that we were initially in a private LinkedIn messaging conversation with another industry individual (who obviously forwarded our conversation to Mr Pittman after we finished the chat).

In reply to Mr Pittman’s above email, we politely replied, asking him “to stop emailing me with threats” and pointing out the following: –

We hoped that would have been the end of it and made mention that we “blocked your friend and I blocked you exactly because I believe that you are “dangerous and deluded” and do not want to get involved in your shameless self promotion”.

Within 30 minutes he had emailed again …

We WILL see who is right and who is wrong in the near future …. won’t we.

You enjoy your closed world….I’ll continue to be disruptive with my invention and work.

It’s easy to sit back and criticize as you see someone bust their ass to take a “thought to make it become a reality.” I would of thought someone like you would be cheering on innovation….but I do understand having the desire to protect status quo.

So if you have read up to this point, perhaps like us you would have thought that was the end of it. Mr Pittman had the last word. We had agreed to disagree.

Bottom line, we were walking away and politely pointing out that “I don’t want to write about you and I don’t want to engage you in any form of conversation. Please leave us alone”.

Remember also that the only time we had told anyone of our opinion of Mr Pittman was to his industry friend in a private message via LinkedIn and yes, we did use the term “dangerous and deluded”.  For the record, in that LinkedIn conversation we were criticised of pandering to the DPAA and not helping those outside that supposed cabal, we wrote “1. he is dangerous and deluded 2. We check stuff and are not in the pocket of DPAA, look at what (we) write about Firefly, a DPAA member, who is also full of shit” – the point being that many times we call people out, but at other times we just ignore them (BoardActive up until this time is one of course that we ignored).  I am sure that many of you, who have been on the receiving end of our criticism will have preferred if we had said NOTHING AT ALL!

I would love not to be writing this now. I went to bed after these email exchanges and metaphorically put the subject to bed as well but oh no, Mr Pittman did not know when to leave it well alone. Nine hours after our earlier email exchange we received the following, this morning …

And oh yeah one other thing….as far as my thoughts on this comment :

“because I believe that you are “dangerous and deluded” and do not want to get involved in your shameless self promotion”…. 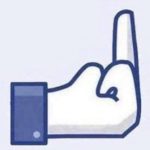 And yes that finger graphic was included in the email!

Like most men, I think I am a good judge of character. “Dangerous and deluded” was just my initial opinion and guess what?  I think I was spot on!

This entry was posted on Thursday, November 14th, 2019 at 13:56 @622 and is filed under DailyDOOH Update. You can follow any responses to this entry through the RSS 2.0 feed. You can leave a response, or trackback from your own site.

3 Responses to “Why We Are Giving @BoardActive A Wide Berth”