The first-ever national digital billboard campaign to feature British Sign Language (BSL) has been launched across the UK by Microsoft to highlight the importance of accessibility in driving innovation. 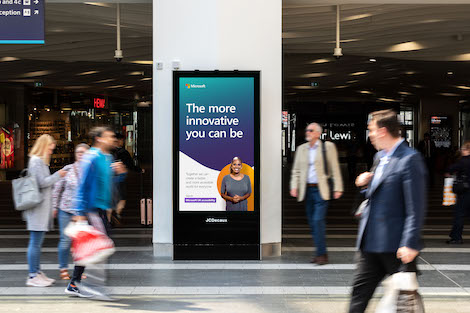 Each digital billboard will show 10-second films featuring a female BSL interpreter who is signing the words next to her. The message reads ‘The more inclusive you are, the more innovative you can be. Together we can create a better and more accessible world for everyone’.

The campaign has been launched as part of Microsoft’s five-year commitment to inclusivity and accessibility and showcases the role technology can play in improving access to digital content for under-served communities, including the 151,000 individuals who use BSL in the UK. The digital billboard campaign is launched alongside Microsoft’s new accessibility website that contains resources for companies to help them become more inclusive.

It includes information on inclusive hiring practices, digital skills, growing a diverse culture, create accessible solutions, accessibility tools, case studies and tips and tricks.
Created in partnership with Signly, the website also features a BSL interpreter, who can sign the information with just a click.
The campaign has been launched at major railway stations

Victoria Oakes, Storytelling and Digital Destinations Lead at Microsoft UK, said: “Innovation comes from diversity of thought and greater diversity can be fostered through building a culture of inclusion and accessibility. Microsoft places great focus on this and this campaign showcases the role technology plays in improving access for underserved populations; sharing our commitment to ensure every person has access to the technology, skills, and opportunity to pursue jobs in a changing economy.”

The BSL interpreters for the site and digital billboards were provided by Signly, which was part of Microsoft’s AI for Good startup cohort. The company joined the Royal Association for Deaf People, JCD, Carat, Posterscope and MRM in creating the train station campaign.

Hector Minto, Director of Accessibility (Evangelism) at Microsoft UK, said “British Sign Language is the preferred language for tens of thousands of Deaf people across the UK. Every day, people are unable to understand important information because of a lack of accessibility features – online and offline. This is holding back companies, who are missing an opportunity to empower their staff, ensure full participation in activities and unlock innovation that could support future growth.”

According to the British Deaf Association, BSL is the preferred language of more than 87,000 Deaf people in the UK for whom English may be a second or third language.

Sign languages differ from spoken languages in many ways. BSL is a visual-gestural language with a distinctive grammar using handshapes, facial expressions, gestures and body language to convey meaning.

This entry was posted on Monday, October 25th, 2021 at 09:34 @440 and is filed under DailyDOOH Update. You can follow any responses to this entry through the RSS 2.0 feed. You can leave a response, or trackback from your own site.