On Saturday between Bank and Monument stations on the London Underground one of the escalator links was re-opened after its 18 months refurbishment. The station is now at 90% strength again after various other related diversions have also been reverted. 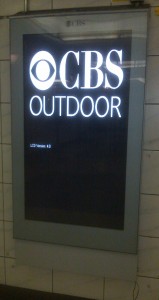 Passengers using this station can rejoice that the online journey planner should at last come up with sensible routes involving interchanges at Bank – previously even the simplest of changes between lines, whilst still physically possible to do if you know where you’re going, were frustratingly re-routed via street level and buses to nearby stations, if you believed the web site results.

Sadly though it seems that Transport for London have not got round to changing this just yet.

The completion of the refurbishment mind you has also meant that closed off parts of Monument station (those parts that have lain dormant behind hoardings for a long, long time) have now been opened up once again and a rather lonely and previously hidden CBS Outdoor digital screen is now visible once again.

Whilst the screen is obviously desperate to start showing content, it is sadly waiting for someone to bring it back to life (proper) and into the happy scheduling fold.

Still, at least it’s boldly showing off the CBS Outdoor brand, and from the smaller, less easy to read message (shown above) we can now take away the fact that it’s an LCD version 4.0.

This entry was posted on Sunday, September 20th, 2009 at 09:49 @451 and is filed under Scuttlebut. You can follow any responses to this entry through the RSS 2.0 feed. You can leave a response, or trackback from your own site.