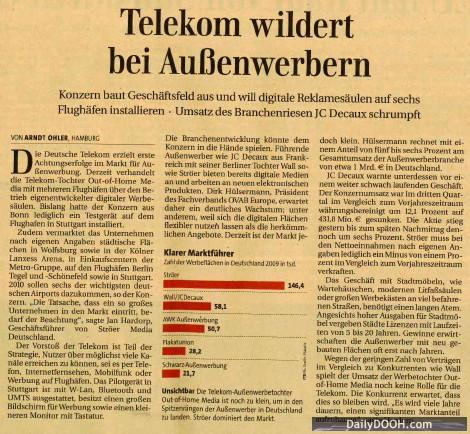 The article basically says that a business unit of Deutsche Telekom AG is expanding and looking at entering the OOH and DOOH space.

Dirk was asked about the business climate of the DOOH industry and the prospects for it. He was quoted as saying that it was a “growing market as DOOH is much more flexible than traditional media and that he expected a 5%-6% share from the overall ad spend in digital”

As we said in our post on Monday ‘Mainstream Press (And Associations)‘ this is exactly what industry bodies and associations should be doing for our sector. OVAB Europe obviously has a PR agency that is networked in the right circles.

This entry was posted on Thursday, November 5th, 2009 at 09:45 @448 and is filed under Scuttlebut. You can follow any responses to this entry through the RSS 2.0 feed. You can leave a response, or trackback from your own site.