Last time we looked at some good reasons why using the formula makes sense when trying to describe screen shapes, and co-ordinating content on to them.

Shown below is one of the screen shapes which was on display at the launch party at Touch nightclub in Manhattan this week, the tiles forming a custom shaped screen with a surround detailing the screen edges. 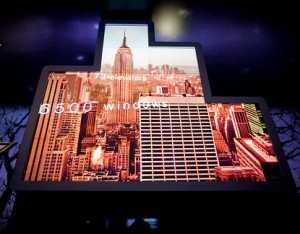 A skyscraper made of MicroTiles

This particular screen shape was called ‘skyscraper’, i.e. with reference to a city’s skyline and a whole mixture of clever content was designed especially for this screen.

The image shown was one small part of a dynamic sequence, and you can clearly see that the design elements have been carefully crafted to make the best possible use of this particular (screen) shape.

So how do we describe this screen with the formula? Just giving it a name ‘skyscraper’ does not help the content or AV people when putting the whole thing together.

Thinking back to our squared paper example with tile (T) and hole (H) elements, and counting from the bottom left, we look at each row and produce a term describing what we have in each column for that row. 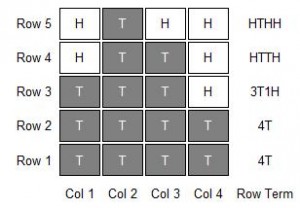 There are two types of row definition, a short and long one. The long definition lists each screen element with a single letter, so the bottom row in this case would be “TTTT”.

All well and good for smaller screen arrays, but what about big screens with, say, 16 tiles across? You start to get an awful lot of letters, and that’s just for one row.

So the short version allows you to summarise the number of continuous elements in a row with a number, so in a 16 tile row it would reduce to “16T”, or in the case of this Skyscraper, “4T”.

This is why we have both types, and each row term can use either long or short version as appropriate in the same formula for the overall screen. In the diagram above, we have used the short version for rows 1-3, and the long version in rows 4 and 5.

So for each row we produce a term of letters (and sometimes numbers) which describe the row. See the diagram for the row term for each row in this Skyscraper screen.

Then we put them together in order, starting with row 1 (from the bottom up) with an underscore character between each one.

At the start of the code, we put the number of screen elements of the overall square shape bounding the screen, with the letter X between them.

So starting from bottom left again, there are 4 across by 5 up, making it “4X5”.

This term goes at the front of the code, and tells you two useful things:-

Putting it all together, all this makes the complete formula for this Skyscraper screen example: _4X5_4T_4T_3T1H_HTTH_HTHH_

This entry was posted on Thursday, November 12th, 2009 at 07:36 @358 and is filed under Scuttlebut. You can follow any responses to this entry through the RSS 2.0 feed. You can leave a response, or trackback from your own site.