But VMG Are Snapping Up Contracts

As we said almost a week ago ‘RAM Investment Group Purchases ASG Media Assets‘ and the official RNS for that acquisition (we repeat our belief that ASG Media was sold off far too quickly and far too cheaply) is below. 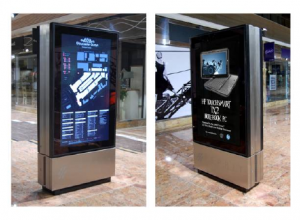 However, the really interesting news is as usual the news that no one else ‘prints’.

VMG have just snapped up the contract at the Trafford Centre for the large LED that ASG Media initially had AND (better still, for VMG) have grabbed the contract for the already installed digital 6-sheets at Gloucester Quays.

This latter contract is particularly good. The kit is already ‘in the ground’, it’s modern, the right way round (i.e. portrait rather than TVs hanging from the ceiling) and Clear Channel must suddenly love VMG!

ASG was a leading digital out of home specialist Media Company which went into administration on 2 November 2009. TrainFX will now commence investing in stabilising, improving and enhancing the existing ASG network in order to provide both shopping malls and advertisers with a more robust offering.

This entry was posted on Wednesday, November 11th, 2009 at 23:15 @010 and is filed under Scuttlebut. You can follow any responses to this entry through the RSS 2.0 feed. You can leave a response, or trackback from your own site.