The Coca-Cola Company plans to replace its historic neon sign in San Francisco’s South of Market district with a state-of-the-art LED display.

Coca-Cola has maintained a display alongside the southbound lanes on the I-80 freeway heading in to downtown San Francisco for more than 75 years. Its LED display, expected to be up and running by the end of December, will be consistent in size and brightness with the existing sign (70′ x 30′) but 80% more energy efficient. It will be powered by 100% sustainable and certified ‘green’ energy. 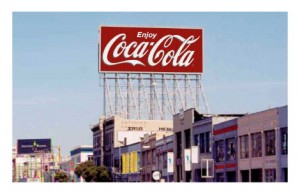 The display near San Francisco’s famed flower market will be visible to drivers approaching the Bay Bridge from the south/east and disembarking the bridge from the north. The current neon sign has become a familiar landmark for those who live and work in the downtown area.

“For decades the historic Coca-Cola sign has greeted those crossing the Bay Bridge and those who live and work nearby with a warm welcome to San Francisco,” says Bea Perez, senior vice-president, integrated marketing, Coca-Cola North America. “It is our desire for the new energy efficient and technologically advanced sign to offer the same hospitable message.”

The original billboards were installed on the rooftop of a newly constructed building in 1937 just as the Bay Bridge was opened and have been replaced several times, with the last update more than 25 years ago. Today, the building houses an independent retail business: Antonio’s Antiques.

The metal materials and wiring from the existing faces will be recycled as much as possible and items such as the old neon will be disposed of in accordance with environmental guidelines.

The new sign will feature the familiar Spenserian script of the Coca-Cola logo on both the north and south of the display. In view of thousands of people who cross the Bay Bridge every day, the high efficiency lighting of the new faces will not increase the brightness of the sign but will enhance the reliability of its performance and with much greater energy efficiency.

Laura Younkin, message integration manager, Coca-Cola North America, says, “We took a multifaceted approach to lighting, construction materials and mounting, to create the most energy efficient display as possible. We also kept in mind the aesthetics and history of our sign in the area. We have been able to secure 100% green energy for the reduced power requirements of the sign.”

In addition to the environmental benefits from powering the new display, its lighter weight and structural upgrades offer additional earthquake stability. The new display will be engineered and assembled by YESCO, a leading manufacturer and supplier of electronic displays in the U.S. YESCO, which is also managing the programming, will manufacture the display in Reno, NV and it will be reassembled in San Francisco starting December 11.

This entry was posted on Wednesday, December 2nd, 2009 at 00:28 @061 and is filed under DailyDOOH Update. You can follow any responses to this entry through the RSS 2.0 feed. You can leave a response, or trackback from your own site.