This Is The BBC… 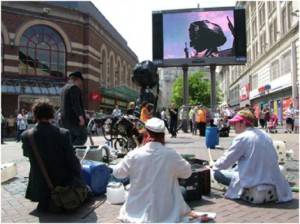 Markham, Ont.-based Capital Networks is the company handling the content management and control platform behind the series of ‘Public Space Broadcasting’ screens appearing in towns and cities across the UK as a collaboration between the BBC, London 2012 and UK local town councils.

Under deployment for the past two years, there are now 20 LED screens up throughout the U.K., scheduled to increase to 40 by 2012.

The screens, mostly 100’ diagona LEDsl, have been supplied by Phillips (three) and Daktronics. The BBC is operating the master control centre from Birmingham, while operations in each town allow local input. 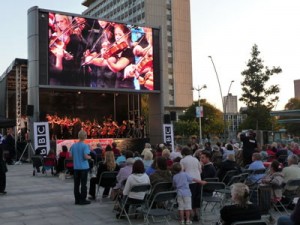 Each screen is connected to the BBC’s global broadcast network, and exploits Internet technology to deliver a 24-hour-a-day schedule, simulcasting BBC 1, 2, 3 or 4 video programming with relays of major broadcast events, news, sport, music, documentaries and much more. Special events from the BBC have included the World Cup; the Beijing Olympics; and the London Opera.

Each screen is also customized to reflect life in its host community with a broad range of local content, including a ‘City Diary’ listings service. Local operations add their own events and activities. Examples of local events have included the town of Rotherham bringing in sand to make a beach, another town celebrating Red Nose Day, and the showing of films by local film makers. 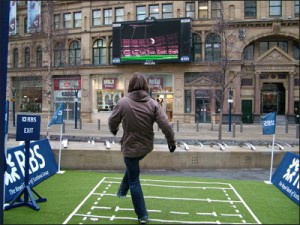 interactive facilities enabling the audience to text their comments, send photo-images to the screen or play al fresco video games. In one game, users kicked an imaginary football. In another, cities vied with each other for points playing with screens of red balls.

And each screen is governed according to local town bylaws, so digital video displays and audio systems are controlled for blackout periods and noise control.

“The BBC did a thorough search and evaluation of content management platforms among various companies, including a three-month bench test, before making Capital Networks its selection,” says Jim Vair, vice-president business development, Capital Networks. “It’s a major project for us.”

(Capital Networks also has other projects in 35 countries including, among them, in Spain, Portugal and Southeast Asia.) 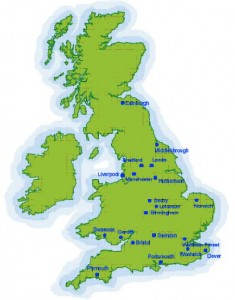 The world’s first Public Space Broadcasting screen in Manchester’s Exchange Square was launched as an experiment in 2003. Having proved itself to be a powerful magnet for urban regeneration and animation for the city’s public space, with BBC as catalyst, the model has now been rolled out to other towns and cities including Birmingham, Liverpool, Leeds, Rotherham, Bradford, Swindon, Derby, Dover, Woolwich, Bristol, Plymouth, Portsmouth, Norwich, Waltham Forest, Cardiff, Edinburgh, Swansea, Middlesbrough, Leeds and Leicester.

The location and siting of the new Big Screens is being handled directly by London 2012 and local town authorities.

Since the screens are carrying BBC content, they carry no advertising.

This entry was posted on Monday, December 7th, 2009 at 11:45 @531 and is filed under DailyDOOH Update. You can follow any responses to this entry through the RSS 2.0 feed. You can leave a response, or trackback from your own site.

One Response to “This Is The BBC…”