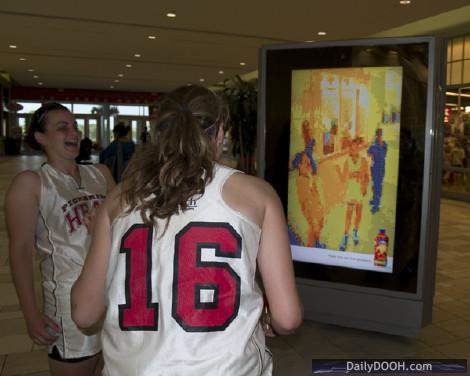 Sun-Rype has launched an innovative element into its new juice campaign in Canada’s Ontario market with an interactive screen application that creates fruit-filled animation.

An interactive ‘fruit mirror’ features a camera and specially designed graphics program that instantly animates people or objects onto a 62’’ LCD screen as ‘fruitified’ images. When someone stands in front of the mirror, he or she is reflected back as a mix of the fruit that make up Sun-Rype juices.

The fruit mirror will be traveling around malls of the Greater Toronto Area as part of a campaign that also involves OOH transit shelter ads, mall posters, and video boards, online and TV advertising. The video boards in downtown Toronto will carry the TV commercial.

The ‘fruity mirror’ was developed jointly by Tribal DDB Canada and DDB Canada’s Vancouver offices (with media buy for the campaign by OMD Vancouver). The live, animated images are entirely composed of pixelated fruit, and notably mirror the effects used in the new Sun-Rype TV commercials.

“Sun-Rype takes pride in the fact that they don’t add any artificial colours, preservatives or sugar to their juices, so the new campaign is made of the same things that their juices are made from: fruit,” says Cosmo Campbell, creative director, Tribal DDB Canada, Vancouver. “This new interactive screen takes this idea one step further by engaging with people, while figuratively demonstrating Sun-Rype’s ‘made with real fruit goodness’ tagline.”

The new 30-second TV spot that will also dominate various video boards depicts a vivacious and colourful, healthy lifestyle scene made entirely of fruit, and is shot in a stop-motion style animation.

Consumers who have joined Sun-Rype’s e-mail list got a sneak peek of the new spot a week before its launch and were given access to complimentary downloads of the song used in the TV spot.

This entry was posted on Monday, June 9th, 2008 at 22:09 @964 and is filed under DailyDOOH Update. You can follow any responses to this entry through the RSS 2.0 feed. You can leave a response, or trackback from your own site.

One Response to “A Very Fruity Campaign”