One element of the OAA’s recent (now seemingly ‘controversial’) campaign running in the UK at the moment that hasn’t been well covered is the use of some of the digital formats. 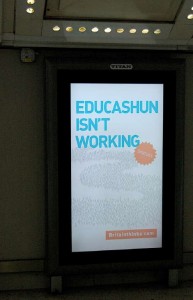 I’m a little disappointed that again this sort of campaign goes only to the big boys – the OAA here (especially because of the coverage elsewhere in Outdoor) had an opportunity to share this campaign around some of the smaller digital networks. If that wasn’t reason enough for digital networks to join OVAB Europe and try and gain some leverage I don’t know what is, Ed

Grand Visual was asked by the OAA to work with creative agency, Beta, to produce motion graphic treatments derived from the static outdoor copy.

Neil Morris from Grand Visual told us that they produced versions of all four creative treatments – Educashun, 1966, Career Women and One Nation.

Neil told us “Our approach was to look at the individual nature of ‘opinion’ and begin each treatment focused on one of the stick figures in the supplied artwork. We then pulled out to reveal the wider nation and a movement of opinion”

He added “The poster campaign artwork from Beta is classic outdoor, being bold, clear and simple with a very strong theme” 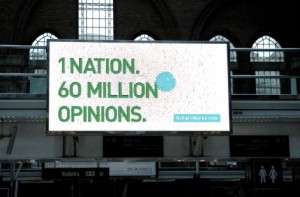 They obviously looked to maintain this simplicity whilst bringing digital outdoor’s greater storytelling potential to bear.

The stick characters in the artwork were animated in each treatment and the ability to introduce punctuation for the creative construct – bold statement vs a call to discuss – reinforced the debate-inducing nature of the campaign. Very nice!

The final deliverables featured landscape and portrait copy at 5 and 10 seconds durations.

This entry was posted on Friday, January 8th, 2010 at 09:31 @438 and is filed under DailyDOOH Update. You can follow any responses to this entry through the RSS 2.0 feed. You can leave a response, or trackback from your own site.