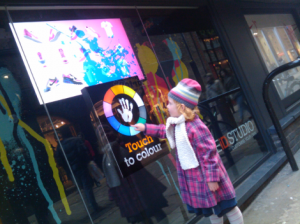 People like to touch, children especially are inquisitive when things light up, are flashy, colourful and they get a response when they touch or gesture.

Isabelle Grace Cotterill-Hawksworth shown here on the right (look at the initials and yes that’s how we get the name of DailyDOOH’s Holding Company) had fun playing with the Touch To Colour window display in the Nike store at Seven Dials (Covent Garden) in London last weekend.

The window installs (we don’t know who did them but guess that it might be MediaZest) has picked up quite a bit of positive press. thedistillery said “Not only do they support the idea of customization and uniqueness when everything is starting to look very safe and bland, but they actually encourage interaction. By touching the store window you can change the color combinations of the products, in effect test driving before you buy. I liked it online but I really love it as a window concept”.

This entry was posted on Wednesday, January 13th, 2010 at 12:44 @572 and is filed under Scuttlebut. You can follow any responses to this entry through the RSS 2.0 feed. You can leave a response, or trackback from your own site.