LEDs in Windows – What Purpose do they serve? 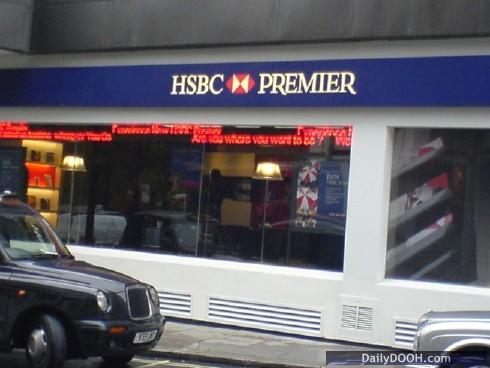 I am not sure why a good brand like HSBC and especially its upmarket brand – HSBC Premier here shown in Mayfair would put an unreadable LED in its window and even worse, then proceed to scroll text across it.

Discrete inorganic light-emitting diode (LED) screens are an interesting topic when it comes to digital signage.

LED screen makers such as Daktronics and Barco have developed new 3mm pitch screens that can be used in some of the same applications as LCD and PDP.

LED has the advantage of long lifetimes and high reliability – although they are expensive and it is clear that there are significant problems in reducing the cost of small pitch LEDs (like 3mm).

Perhaps LED’s biggest problem is with “fill factor” – the area of the display actually occupied by the display pixel is small relative to the full display surface and this means that as the viewer gets closer to the screen, the image quality gets ‘pixellated’ and the quality of the image gets worse.

A rule of thumb that I believe LED display installlers have is that the MINIMUM viewing distance is around the same number of metres as the pixel pitch in millimetres.

For example, this means that effective minimum viewing distance of a 3mm LED screen is 3 metres, or 6 metres for a 6mm.

Then you probably need to add on a further 50% in distance to get a reasonable viewing quality.

Scrolling text LEDs in windows are surely a waste of time?

This entry was posted on Monday, September 10th, 2007 at 10:09 @464 and is filed under Scuttlebut. You can follow any responses to this entry through the RSS 2.0 feed. You can leave a response, or trackback from your own site.

One Response to “LEDs in Windows – What Purpose do they serve?”