So much to talk about and so little time to say it in…was a day and a half too short or too long? 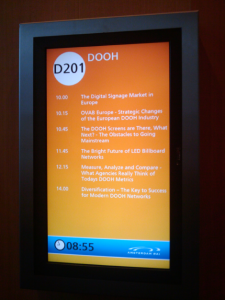 Too long perhaps because attendance was down on Tuesday morning – was it the lure of the exhibition or were Intel & Microsoft just not sexy enough? Too short because it’s impossible to cover all the issues confronting our market in just one day.

Not an easy juggling act but conference organizers Oliver & Florian of Invidis just about pulled it off. There were high points and low points, inevitably as there are at all conferences. From the selection of topics, the objectives were clearly ambitious – provide an overview of the DOOH market globally and the prospects but also the challenges and obstacles to growth.

Whatever you do in the planning stages to organize an interesting and well-flowing event, the success in the end depends to a large extent to the ability and quality of the presenters. Difficult to believe as it may be, some speakers actually backed out at the last minute, which made the organizers task even more complicated. And as a result, some of the presentations didn’t match up to the organizers high expectations. Which is where the lows come in. Presenting is a skill and not something to be delegated to juniors – most certainly not at this level of audience. And getting the balance right between talking about your own company and its products and talking about topics which interest your industry colleagues shouldn’t be that complicated. It’s legitimate to explain briefly who you are, what your company does and so why you’re qualified to talk about your subject. But that doesn’t give you license to harangue the audience with an endless list of your products and achievements – which is unfortunately just what some of the presenters did… they know who they are!

But let’s talk more about the highlights and why they shone. For me there were three that really stood out:

The first was a clear, well-presented overview of the state of Out of Home media and the part that digital plays and will play in this scenario. What also impressed was the fact that it was delivered by one of the leaders (the leader in some categories) in the business with an honest modesty which is rare and appreciated.

Dr. Don Shaw has the balance between information and pitch down to a fine art. First he talked us through the disadvantages and problems in assembling large screens with existing technology in a clear and simple manner that even a non-techie like me could understand, then a very brief reassurance that there is now a new technology that overcomes these problems (the pitch) followed very elegantly with a short overview of other competing technological solutions to the same problem. The result was not just the purest presentation (devoid of endless self-promotion) but also the effect was that the pitch was both subtle and devastating.

It was certainly more difficult for Dr. Leo Kivijarv to separate out the facts from his company by the nature of his subject, but he did succeed. The depth, clarity and oversight of the PQ study that he presented was truly exemplary – and the information that he did reveal was a mouth-watering appetizer for the full study. Again, the simplicity and elegance of the delivery, punctuated with some juicy anecdotes, made the pitch even more effective.

These three presentations represented for me the highlights of the event and set the standard by which all others should be judged.

Congratulations to all three and to the organizers for selecting them and creating the platform for their performances.

This entry was posted on Tuesday, February 2nd, 2010 at 16:56 @747 and is filed under DailyDOOH Update. You can follow any responses to this entry through the RSS 2.0 feed. You can leave a response, or trackback from your own site.