Newspapers in North America, looking to shore up their coffers in an era where media fragmentation has led to downturns in circulation and advertising revenue, have been looking to new means by spreading the news via the Internet (sometimes charging for content), running promotions to draw attention to themselves, and other means.

Chicago Tribune has found more than one additional new way to draw attention, both in the digital out-of-home sector – and these are also beginning to draw new revenue for the daily.

Jim Rotche with the interactive window

If you walk down Michigan Ave. past the Michigan Tower in Chicago, the Tribune offers an interactive window that is passed by an average of 50,000 people a day. Already getting a lot of attention from this sidewalk traffic, it’s also drawing advertising sponsors – and more are expected to come when the window adds sound next week, and a working camera within the next couple of months.

Measuring 23” wide by 40” high, the window allows the user touching the window to choose the information he wants, and it allows iGotcha to collect data on the number of users (of interest to potential advertisers). 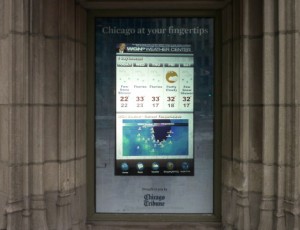 It allows the user to, for example, find a museum and get on its email list. In a couple of weeks, when its first sponsor (an as-yet-unidentified department store) is added, the window will have sound to go with the sponsor’s 30- or 60-second videos. And when the camera is activated in a few weeks, passers-by will be able to take a photo of themselves and email it, all from the window.

“iGotcha has been tremendous to work with, and we’re continuing to develop this project,” says Jim Rotche, the Tribune’s manager of strategy and development.

With ZipCast, Chicago Tribune is putting 42” screens in grocery stores, mainly independents. With three-to-five screens per store, the screens carry breaking news, weather, sports as well as rotating ads, plus the stores’ own promotions. At this time, all the stores are in the Chicago area, but this could be expanded, says Rotche.

Rotche says that eventually both the interactive window and the in-store screens will also be equipped for mobile interaction.

This entry was posted on Wednesday, February 17th, 2010 at 08:25 @392 and is filed under DailyDOOH Update. You can follow any responses to this entry through the RSS 2.0 feed. You can leave a response, or trackback from your own site.