Fancy A Bit Of Golf? 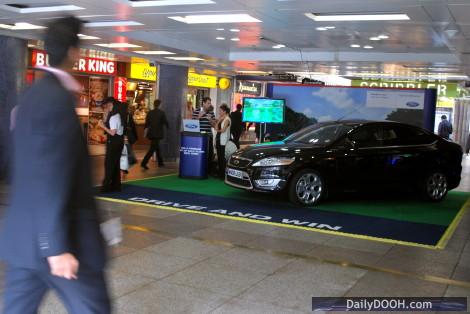 It’s a 5 day interactive campaign that started yesterday (Monday 14th July) and can be seen at the likes of Liverpool Street in London, Glasgow Central and Manchester Piccadilly stations.

It uses both the concourse and Titan’s Transvision digital screens – commuters are even able to compete against each other in an interactive virtual golf game.

The interactive game is shown on the 42 inch LCD screen (shown in the picture above) testing how far the competitor can hit the golf ball.

Interestingly throughout the five days, the giant Transvision screens will display the top-scoring performers’ names on a leader board and hey! the highest scorer at each station will win a set of premium golf clubs (if you are a golfer go see them at the station as free Ford-branded Tee packs are also being handed out).

Planning was organised by Mindshare and Kinetic. This is a nice mix of experiential and digital.

This entry was posted on Tuesday, July 15th, 2008 at 00:13 @050 and is filed under Scuttlebut. You can follow any responses to this entry through the RSS 2.0 feed. You can leave a response, or trackback from your own site.