Despite the protests of large LED screens in both Berlin and Moscow we believe that this 31 metre in length by 7 metre high digital billboard from Ocean Outdoor in Liverpool is Europe’s largest commercial (i.e. takes advertising) LED. 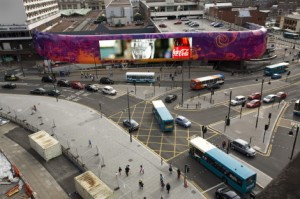 You don’t get to buy / build (or even lease) billboards this big without deep pockets and Ocean Outdoor, a privately held company took on board ‘significant investment’ from Smedvig Capital to help make this (and other things yet to be announced) happen.

Ocean Outdoor who like to specialise in premium advertising opportunities across the UK worked in association with Land Securities, one of the UK’s better Real Estate Investment Trusts (REIT) to build the giant media wall shown above.

The media wall / billboard (perhaps it is too big to be simply described as a ‘billboard’) was first let by Ocean Outdoor for commercial use yesterday (28th July) in a deal we believe with Coca-Cola.

The wall is situated opposite Liverpool’s Lime Street railway station and is just in front of St Johns Shopping Centre (soon itself to undergo a much needed UK PDS 100m transformation).

Grant Branfoot, Managing Director of Ocean Outdoor told us “This is a fantastic advertising platform. The media wall is a unique structure with unavoidable presence. The digital screen is the first of its kind in the UK and provides a new innovative product to the advertising market.”

Note in the picture how the digital screen is flanked at each end by tensile fabric for additional media images and messages.

The Media Wall has already got the interest of the media buyers, James Davies from Posterscope and Board Director – Hyperspace told us exclusively “The site is in a great high profile location within Liverpool and the quality of production and technology is similarly impressive. It’s encouraging to see Local Authorities taking a progressive stance and granting permission for such a site which will no doubt enhance the public’s perception of Liverpool being a modern, forward thinking city. Several of Posterscope’s research projects have also demonstrated that certain digital displays can help make people think that the advertised brands are innovative and cutting edge and we expect Ocean’s site to perform similarly well in this respect”

Liverpool of course is the European Capital of Culture for 2008.

We aim to keep you updated on who advertises on it during the rest of the year – it’s certainly going to be interesting and make quite an impact.

This entry was posted on Tuesday, July 29th, 2008 at 10:01 @459 and is filed under DailyDOOH Update. You can follow any responses to this entry through the RSS 2.0 feed. You can leave a response, or trackback from your own site.