We nearly spilt our espresso’s this morning when we opened our email inbox to find some great pictures courtesy of JCDecaux showing their PrimeTime digital network and the Torch – we read one of the JPGs which was attached as ‘independent murdochcrap.jpg‘ it was of course ‘independent murdochcrop.jpg’ but sometimes you know (especially during UK general election fever) the eyes don’t lie! 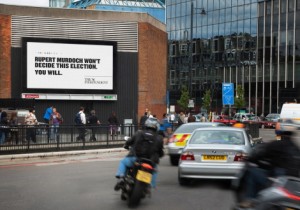 Anyway this campaign went up early this morning on JCDecaux’s PrimeTime digital network (20 digital sites in London) and on the Torch just showing the wonderful flexibility and immediacy of outdoor.

It’s a one day campaign for The Independent – a UK newspaper owned by Russian tycoon Alexander Lebedev, a former KGB spy turned media mogul who paid 1 British pound for the newspaper back in March 2010 (and no you could NOT make this up if you tried).

Booked through Posterscope and Walker Media, the creative reads “Rupert Murdoch won’t decide this election. You will”.

This entry was posted on Thursday, April 29th, 2010 at 10:33 @481 and is filed under DailyDOOH Update. You can follow any responses to this entry through the RSS 2.0 feed. You can leave a response, or trackback from your own site.