As part of an AUS $5.5million investment in OOH down under we see that EYE continues to lead the charge in the retail space with the introduction of Large Format Landscape Digital sites in premium shopping centres such as Sydney Chatswood Centre, Bondi Junction and Sydney Central Plaza. 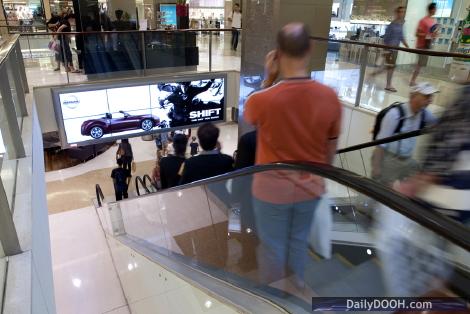 Theses sites are 4 ½ times larger than the existing Landscape Digital sites and are strategically placed to engage with Shoppers in high traffic locations.

EYE’s ANZ CEO Mike Tyquin told us “These developments showcase the value of our audience proposition and are a cornerstone for continued growth for EYE. These world-class developments provide advertisers with new opportunities, bringing more choice to the market via high-impact communication to extremely valuable audience sets.”

We asked Stephen Rubie, General Manager Eye Study & Innovation what the technology he used there was and he told us “NEC X461UN series (UN for ultra narrow). They are 46″ LCD with a 3.5mm bezel or 7mm between screens”.

He added “As they are based on a consumer technology it means they have massive price scale benefits even off the web you can buy them for AUS $4.7k each!”

This entry was posted on Monday, May 3rd, 2010 at 08:37 @400 and is filed under Scuttlebut. You can follow any responses to this entry through the RSS 2.0 feed. You can leave a response, or trackback from your own site.