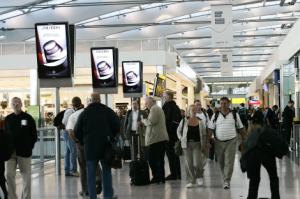 The contracts were awarded following a competitive tender for a potential 8-year term.

Julie France, Managing Director of JCDecaux Airport in the UK told us “This is a great win and we are delighted to have the opportunity to build on our established partnership with BAA. It will give our clients access to the most significant airports in the UK. Heathrow and Heathrow Express will cement our position as the No 1 choice to reach the premium international traveller. Our Scottish airports will play a key role as global gateways and are an intrinsic part of the local media marketplace. Our offer focused on innovation, including the expansion of digital and the application of near-field marketing technology and augmented reality concepts. The contract comes at an exciting time for UK airports with the Olympics in July 2012.”

This entry was posted on Friday, May 7th, 2010 at 03:32 @189 and is filed under DailyDOOH Update. You can follow any responses to this entry through the RSS 2.0 feed. You can leave a response, or trackback from your own site.