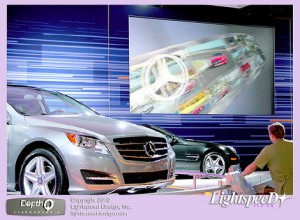 impressed us at this exhibit, and while we’re talking film, it’s worth noting that forward-thinking advertisers are beginning to find dramatic ways to include 3D in their promotional ventures.

The striking, fast-paced driving film was captured in 3D at 4K resolution and presented on both a large high-brightness rear-projection screen as well as multiple 3D monitors in a huge 88 x 158 ft open exhibit area. It was viewed using theater- style polarized glasses. 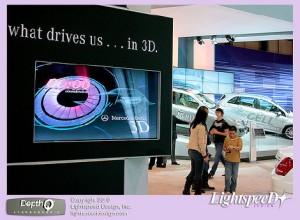 “Our production pipeline benefits from advanced filmmaking technologies that we’ve developed and honed over the past 17 years producing stereo 3D content,” says Chris Ward, president, Lightspeed Design. “DepthQ Stereoscopic is a mature, live-action 3D filmmaking process that maximizes creativity, efficiency and accuracy from acquisition through post. Combined with our knowledge and experience in 3D film-making, it allows us to produce comfortable, visually impactful 3D cost-effectively.” 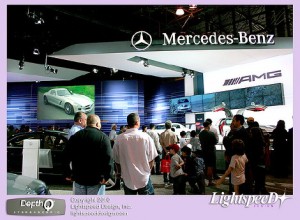 This was the second major promotional project for Dimensional Communications and Mercedes, and it will be presented at many other Mercedes-Benz events this year.

This entry was posted on Wednesday, May 12th, 2010 at 07:30 @354 and is filed under DailyDOOH Update. You can follow any responses to this entry through the RSS 2.0 feed. You can leave a response, or trackback from your own site.