Projection Summit 2010 Round Up

The two day Projection Summit 2010 held in the run up to InfoComm 2010 was a rich source of information about projection and associated technology. While some of the presentations were necessarily deeply technical, there was also some more strategic and interesting information to take away. 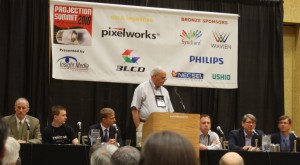 Lasers as a primary light source loomed large during the first day. In a good overview presentation, Greg Niven of NECSEL (far left in the picture) went as far as to say that if projector manufacturers who use traditional lamps as a light source aren’t considering using lasers, they should really start now. The biggest advantage is that lasers have a relatively long life, and the light output doesn’t degrade quickly over time in the way that some lamp sources do.

During the panel discussion for this session, the hot topic discussed was Laser speckle, which in certain circumstances means the viewer perceives a grainy or sparkly look to the eye. The main problem some see is that it’s difficult to try and quantify and measure it, and therefore how do you know if technical advances have really reduced the problem?

As mentioned previously, Amit Jain, President of Prysm, introduced their Laser Phosphor Display (LPD) technology which uses lasers not as a primary light source, but to scan and excite phosphor pixels on a screen surface which actually output the light to form an image, in the same way as a CRT display. 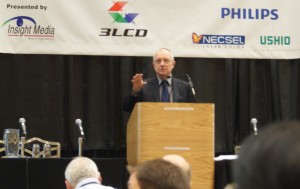 In the second day Bob Rushby, CTO of Christie Digital, talked about their new digital canvas MicroTiles, which of course are powered by rear projection DLP LED light engines, and the creative possibilities for making non-standard shaped displays. He explained in detail how they went about developing the technology, and how their initial requirements shaped the engineering and led to the product features in the final product. 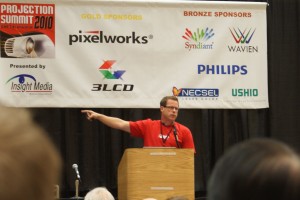 Gary Kayye of rAVe Publications was his usual dynamic self, and provocatively asked “Are projectors dying a rapid death?” He teased the audience nearly to the end of his presentation with this question and pulled no punches when describing the drawbacks of projection technology as he sees it. What is the impending projector killer? Citing recent and rapid changes in the marketplace for music purchases and personal playback caused by mp3 players (largely the iPod) and also the smartphone and mobile market (largely by the iPhone), the answer he believes is personal information displays, ie the iPad. Recently in classroom sessions with students, Gary has stopped using projectors completely, and has converted to streaming common classroom content to iPads, so that each student can annotate, customise, and store it personally.

Also a session on Pico (ie very small) projector design aspects showed that this emerging technology is moving pretty rapidly, and thumbnail-sized prototypes are already out there just waiting to be built into mobile phones, to bring small scale anywhere projection to the masses. Commercial applications will also be plentiful, such as small personal table top displays and short throw projection in retail spaces.

From the summit you came away with a good sense that the next year or two will bring many significant advances in projection technology. There’s a lot of people working hard to make sure the projector is not dead yet.

This entry was posted on Friday, June 11th, 2010 at 02:58 @165 and is filed under DailyDOOH Update. You can follow any responses to this entry through the RSS 2.0 feed. You can leave a response, or trackback from your own site.