Apple finally opened its second retail store in Paris, France on Saturday July 3rd. I wasn’t there myself, being en route to Germany to watch the local team squish Argentina in the quarter final. But Steve Jobs’ team was out so he was able to make it, dressed in his trademark black polo shirt.

There was the usual hullabaloo with crowds around the block etc., as Apple fans queued up to anoint the store and get their hands on an iPad or a new iPhone. 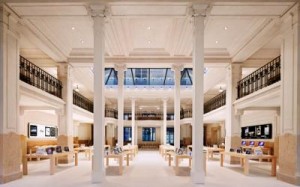 It is known as the Apple Store, Opéra, due to its prime location near to the original Opera de Paris. This a high traffic area near large department stores frequented by tourists and well-heeled Parisians, who can afford to shop in luxury for luxury goods.

The new store has been a building site for well over a year, as skilled workmen were brought in to preserve and restore the historic architecture, such as the wooden doors, arched windows and wrought-iron balcony railings of the former bank building. 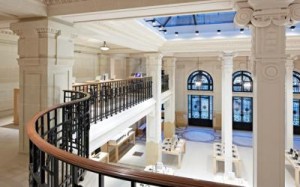 ...all wrought-iron and marble

The building now features a 115-foot wide storefront with a glass staircase leading to the mezzanine.

In stark contrast to the Sony store, it is almost devoid of digital screens, letting the product on display do the talking. There is a screen in the modestly named ‘Genius Bar’ but otherwise all you see is marble, mosaics and wrought iron.

This entry was posted on Wednesday, July 7th, 2010 at 13:56 @622 and is filed under Scuttlebut. You can follow any responses to this entry through the RSS 2.0 feed. You can leave a response, or trackback from your own site.