The official announcement is that Sky News and Amscreen have reached an agreement that will see Sky News become the exclusive news provider to Amscreen’s nationwide network of digital forecourt screens BUT as always there is much more to the announcement than at first meets the eye.

Yes, it’s a content deal for Sky News but that’s just one (small) part; Sky will be using the Amscreen network to advertise their brand and products using ALL of the benefits of digital as they target individual regions, make extensive use of day parting etc. 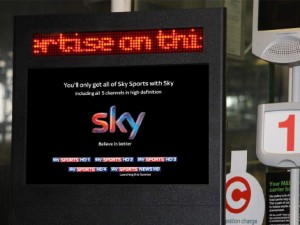 A source close to the company also suggested that Sky would be given access to Amscreen’s own portal in order that they can control what and when they advertise themselves.

James Weeks, Executive Producer, New Media at Sky News told us “As part of Sky News’ digital distribution strategy, we aim to reach viewers across as many digital screens and platforms as possible, from TVs to laptops, train stations to iPhones, and laptops to iPads. By expanding to Amscreen’s forecourt network, we have another opportunity to reach viewers with breaking news in an innovative way, getting the news that matters to viewers no matter where they find themselves”.

Simon Sugar, CEO at Amscreen was quoted as saying “We are thrilled to be working with Sky News to offer the forecourt network audience another value-added service in the form of live newsfeeds. This delivers real value to customers and in so doing, make the digital screen network an even more attractive platform on which to advertise. We’re delighted that Sky itself will use the network for some of it’s own brand marketing.”

This entry was posted on Tuesday, August 3rd, 2010 at 07:55 @372 and is filed under DailyDOOH Update. You can follow any responses to this entry through the RSS 2.0 feed. You can leave a response, or trackback from your own site.