McCarran International Airport in Las Vegas sees a lot of glitter, celebrities, and material for bigger-than-life attractions pass through its terminal doors, so it seems fitting that it now holds what is believed to be the largest video wall display at a U.S. airport. 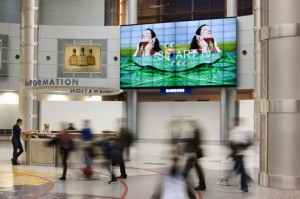 McCarran announced back in August that the Clark County Board of Commissioners approved a deal to have electronics giant Samsung provide 130 x 46-inch LCD screens that will create four separate video walls in the airport for beaming of advertising and airport messages and the installation is now complete.

Samsung gets the right to brand the displays in exchange for the screens, which are valued at more than USD 570,000.

The panoramic video displays were all installed on time by the end of 2010, with the largest display going up in McCarran’s D Concourse rotunda. Samsung officials say that the 100-screen tiled formation will 33’ x 19’. Three smaller video walls will each use 10 screens to create 6’ x 9’ displays in the A, B and C concourses.

“McCarran has a reputation in the industry for harnessing the power of technology to enhance customer service,” says Randall Walker, director of aviation in a statement. “The dynamic nature of this landmark digital video network will allow us to communicate information to our customers in an eye-catching format.”

Programming on the displays will consist of both paid advertising and airport messaging. Alliance Airport Advertising estimates that the video walls will produce an additional $500,000 in advertising revenue for the airport each year.

This entry was posted on Tuesday, January 4th, 2011 at 00:22 @057 and is filed under DailyDOOH Update. You can follow any responses to this entry through the RSS 2.0 feed. You can leave a response, or trackback from your own site.