How Many People Can You Fit In A Mini?

To celebrate the launch of the new, four-door MINI Countryman, the innovative car brand has been attempting to smash that favourite world record of students everywhere: ‘how many people can you fit in a MINI’. This time, however, with a modern twist. 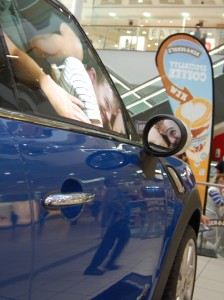 Over the summer, a series of special fibreglass replicas of the new MINI Countryman have been touring the UK appearing in stations, shopping centres and selected streets with the public invited to join in this novel record attempt. The twist? The people “inside” the MINI were not really inside it at all.

In London, Bristol, Birmingham, Leeds, Manchester, Newcastle, Liverpool and Glasgow members of the public were invited to record video footage of themselves in a specially constructed booth at each location. Using the latest interactive digital installation technology, this was then uploaded and projected onto the inside of the MINI Countryman, as if they were squeezed in, looking out from within. Participants could then watch themselves “pressed against the glass”, in the middle of the record-breaking attempt.

For even greater participation, people were also able to share their video with their friends on both their own and the MINI UK’s Facebook page, where they were added to a montage of all of the MINI record breakers.

The campaign was devised and created by global communications agency, Profero, and leading out-of-home agency Posterscope who have worked on a number of innovative and award-winning campaigns on behalf of MINI since 2004 – who will forget the life sized Mini seemingly only held on only by a magnet on City Gateway Media‘s screen in Manchester a few years ago?

To date the campaign has been hugely successful with just over 6,000 people taking part in the world record attempt and many more enjoying the spectacle from the sidelines and on Facebook.

Ysabel Vazquez, National Communications Manager for MINI UK told us “The MINI Countryman is the first 4 door MINI and we wanted to take it out to the UK public to show them what it looks like. It was the perfect opportunity to revive a well loved piece of MINI’s heritage and demonstrate the increased size of this new, bigger MINI by working out how many people we could fit into the car but in a totally high tech way.”

MINI UK Facebook users can invite friends to join in the fun, and enter into a competition to see who can get the most friends inside their virtual MINI Countryman. The lucky winner will enjoy a ‘My MINI Road Trip’: a 3 day UK health spa holiday, and of course, a MINI Countryman to get them there.

This entry was posted on Tuesday, September 7th, 2010 at 22:25 @976 and is filed under DailyDOOH Update. You can follow any responses to this entry through the RSS 2.0 feed. You can leave a response, or trackback from your own site.