Two items on the use (or not) of the Apple iPad caught our eye last week. First off, we noticed an interesting observation in an interview with DailyFrontRow.com by Tyler Brule, founder of Adrian’s favourite magazine Monocle and founder also of the branding agency Winkreative (and in the past founder of Wallpaper). 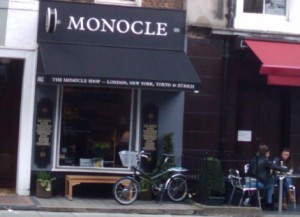 Tyler, when asked about the importance of the iPad, says, “Either the iPad is going to be the most revolutionary delivery system for media ever invented, or it’s going to be a great presentation tool for PowerPoint”

“The main thing is that we shouldn’t confuse the fact that it’s a delivery device. It’s not media. You still have to feed the thing.”

Further, he says that he’s very concerned “for publishers who have chucked a hell of a lot of development money into making something that works on the iPad.”. He says,” Listen, guys: If your magazine isn’t working at the moment in print or on the Web, this isn’t going to save you!”

In what is believed to be a first for a provincial government, all 18 Saskatchewan Party cabinet ministers and five senior officials have been issued an iPad; a move intended to facilitate a move to an ‘eCabinet’ system that will lead to a big reduction in paperwork. Ministers will access cabinet documents electronically – rather than receive the mammoth briefing binders that typically accompany each meeting.

But while the vast choice of apps is a large selling point for most interested in the iPad, there are ‘very strict’ guidelines for politicians and staff who are given the tablets: ‘It’s for government business. It’s not meant for personal use.’

Wonder if they’ll be able to keep their fingers off the apps though!

This entry was posted on Thursday, October 7th, 2010 at 10:15 @469 and is filed under DailyDOOH Update. You can follow any responses to this entry through the RSS 2.0 feed. You can leave a response, or trackback from your own site.