“This event was not 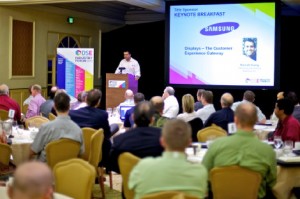 just informative for me being new to the digital signage role, but a great networking event to connect to others and to be able to reach out to them as a resource.”

End users and sponsors alike were happy with the event.

“The opportunity to interact both professionally and socially with so many qualified accounts and industry professionals was invaluable,” says Dave Adams, senior account manager for Milestone AV Technologies.

Tom Link, senior director of Life Time Fitness, says, “The format of the conference was excellent and the two days of meetings could be the most useful time I have spent at a conference, ever.”

The forum’s format was designed to allow participants to develop long-term relationships and based on attendee comments, that goal was reached.

“The one-on-one meetings with CEO’s, presidents and key personnel from top digital signage companies were an invaluable experience,” says Bob Barnett, project manager for Vulcan Sports and Entertainment. “I was able to develop personal relationships with key people in the industry as well as learn about new startup technologies. I would highly recommend this forum to both vendors and end-users.”

“Networking has always been very important to our attendees and we were very pleased to create the opportunity for industry professionals to engage in more meaningful strategic discussions in an atmosphere that lent itself to developing deeper business relationships,” says Chris Gibbs, president of Exponation.

Those who attended were so positive about their experience that DSE will announce a schedule of two additional Industry Forum dates in the near future. Because the Forum is a limited seating event, if there is an interest in attending or being posted on a waiting list to sponsor either of the 2011 events, contact Dave Doucette at ddoucette@exponation.net.

This entry was posted on Thursday, October 14th, 2010 at 13:01 @584 and is filed under DailyDOOH Update. You can follow any responses to this entry through the RSS 2.0 feed. You can leave a response, or trackback from your own site.