Clear Channel Spectacolor Adopts A Cause

Clear Channel Spectacolor, U.S. market leader in spectacular sign displays and a division of Clear Channel Outdoor, has been named the ‘Heart of Gold Sponsor’ by Heart Gallery NYC for its generosity and support in building awareness of the tens of thousands of children in foster care who wait and hope for permanent families. 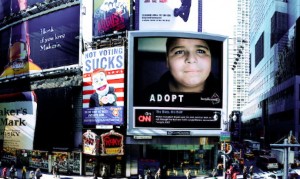 Clear Channel Spectacolor and the Clear Channel Foundation together have committed $20,000 for the sponsorship of Heart Gallery NYC’s travelling portrait exhibit, along with the use of 21 billboards in Times Square, White Plains and New Jersey throughout the month f November.

“We are pleased to be able to help Heart Gallery with our unique services and support its mission to raise public awareness of adoption,” says Harry Coghlan, president and general manager of Clear Channel New York and Clear Channel Spectacolor. “Our philanthropic efforts have the chance to touch children’s lives in a truly powerful way. Involvement in causes like this is an integral part of Clear Channel’s culture and values. The Company and its employees aim to be a powerful force for positive change in the communities we touch.”

November is recognized as National Adoption Awareness Month. While all adoption-related issues are important, the particular focus of the month is the adoption of children currently in foster care.

Heart Gallery is a unique non-profit organization that uses the talents of award-winning professional photographers who capture the spirit of children in the foster care system. The portraits taken by these notable shutterbugs are shared via the Heart Gallery Web site and travelling gallery exhibits in the hope that potential families will be moved to adopt. Thousands of children have found adoptive homes through Heart Gallery, which has more than 100 chapters in the United States and Canada.

“Clear Channel’s charitable donation will raise public awareness of the more than 115,000 children in the United States in need of adoptive homes,” says Laurie Sherman Graff, executive director, Heart Gallery NYC. “By committing the invaluable tool of advertising space on their digital SpectacolorHD screen in Times Square, as well as other billboards in White Plains, NY, and New Jersey, Clear Channel is helping us ensure that the portraits of foster children will be seen by as many potential adoptive families as possible.”

Heart Gallery NYC is debuting the exhibit in an opening reception held in New York City at the Times Square Information Center today, Nov. 10. On Nov. 11, the exhibition opens to the public and moves to the Amtrak Rotunda in Pennsylvania Station, running through November 18. From there, the Heart Gallery NYC portrait exhibit will tour major destinations across New York City’s five boroughs throughout 2011.

This entry was posted on Thursday, November 11th, 2010 at 15:10 @673 and is filed under Scuttlebut. You can follow any responses to this entry through the RSS 2.0 feed. You can leave a response, or trackback from your own site.