This isn’t a screen per se, but we found this effort in downtown Montreal by Canada’s top arts and crafts supplier DeSerres pretty neat.

Founded more than 100 years ago, DeSerres is Canada’s top retailer of arts and crafts supplies, games and toys, scrapbooking, framing and decorative items. It has 27 branches across Canada, including its virtual store, deserres.ca. 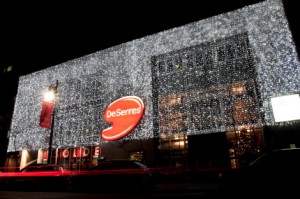 DeSerres chose to wrap itself in lights as the holiday season approaches with an impressive luminous curtain 2,775 sq. ft. in area, about 30′ high and 95′ wide. More than 18,000 pure white LED lights and 240 starflash lights were used to create a truly spectacular effect. These LED lights, an exclusive patented product, provide outstanding brightness, casting light through 320 degrees. They have a long lifespan as well as very low energy consumption.

The unique installation was officially inaugurated Nov. 16 by Marc DeSerres, company president, and will be kept on display until the end of the winter.

“We want to create a magical effect by giving our façade this lights curtain, which is unique in our city,” he says. “The Quartier des spectacles (a new entertainment district, Ed.) has brought new dynamism to Montréal, and it’s in this spirit that we wish to contribute in our own way to beautifying Sainte-Catherine Street now that the construction work is nearly over.”

The lights curtain is an original design by Blachère Illumination, an international company well known for its illuminations on the Champs Élysées in Paris as well as in Monaco, Milan, St. Petersburg, New York, Toronto, Vancouver and Calgary, among others. Blachère Illumination has been established in Canada for eight years and in Québec for four, with most of its production done in Canada. It lights up numerous monuments, including Notre Dame Basilica and the World Trade Centre Montréal as well as several major commercial arteries in Montreal and Quebec City.

Renewed consumer optimism motivated Marc DeSerres to make the distinguishing and symbolic gesture, offsetting the gloom that has characterized the retail trade in the last several years.

“With the holidays approaching, we wanted to give a nod to our customers and create a highly festive mood in the hope of creating a bandwagon effect for all the merchants around us on Sainte-Catherine Street, which remains Canada’s greatest shopping street,” says DeSerres.

This entry was posted on Friday, November 19th, 2010 at 09:45 @447 and is filed under DailyDOOH Update. You can follow any responses to this entry through the RSS 2.0 feed. You can leave a response, or trackback from your own site.