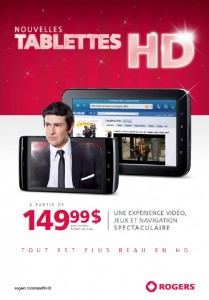 Using the theme line ‘tout est plus beau en HD’ (Everything is more beautiful in HD), the campaign is running on television, cinema, out-of-home – both traditional and digital – in print and on the web. The out-of-home includes mall banners and door decals as well as rouge banners in universities as static pieces, while digital includes a cinema full motion spot as well as digital cinema lobby screens.

Goal of the campaign is to demonstrate the exceptional visual quality of HD.

Production house is Jet Films, Montreal. Media is by OMD.

This entry was posted on Monday, November 22nd, 2010 at 07:35 @357 and is filed under Scuttlebut. You can follow any responses to this entry through the RSS 2.0 feed. You can leave a response, or trackback from your own site.