POPAI the global association for marketing and retail, has released its latest Digital Signage Survey. The results are very uplifting. The survey found that the number of shops that are now using digital signage has nearly quadrupled since 2007 and this number is set to continue to grow. Just over 46,000 stores are now using digital signage, compared to 12,500 three years ago. This is expected to rise to 58,000 by the end of 2011 and include the adoption of new technologies and interactivity. 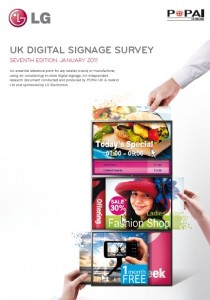 This is the seventh edition of the survey, but three years have elapsed since the last survey. The fact that there’s been a gap between surveys allows us to see how much the industry has grown since 2007 in one glance – the reason why there’s been such a gap is because they didn’t have sponsorship to carry out the research. The UK has had big changes since 2007 including economic recession and change of government.

LG Electronics sponsored this latest survey with clear objectives in mind. At the end of last year LG launched a series of products specifically designed for the DS market such as the ‘shine-out’ monitor – the M4224F, a 65” wide screen plasma monitor and the stretch screens, which are 29”and 38” long strips of LCD (the M2900S and the M3800S). LG PR manager Sarah Brambley, commented, “We wanted to give our partners and clients a better idea of how important this sector is and the pace in which is growing.”

Nick Gale, CEO of Realisation – the company doing the fieldwork for the research, said, “those of us working in the industry are aware that there is an increasing penetration of digital signage networks across all retail sectors. LG and POPAI have enabled a particularly useful survey which provides an accurate measurement of emerging networks and identifies the key trends behind this growth.” 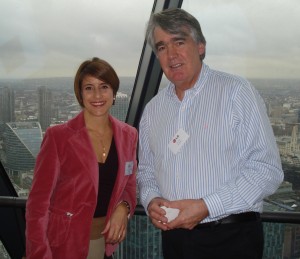 The UK digital signage survey talked to more than a hundred end users including UK retailers, brand owners, shopping centres, and network operators. It focused on screens used in place of (or to complement) traditional Point of Purchase. It excluded big outdoor displays, ATMs and screens used within a trade only environment, information only systems, and screens used primarily for entertainment – theatres and cinemas for example.

Content was touched upon but very superficially. There was no information on the type of campaigns that work best in this environment. Although an increasing use of interactivity was mentioned, the survey focused more on whether the content was local or centralised and the frequency in which this content is changed.

The biggest change it found was with content distribution; while in 2007, DVD was the most popular method of distributing content to screens (45% of the total), this has now changed to PC/LAN (Internet) as networks become far more sophisticated. Information tends to be stored centrally and selected and changed locally. More than half of respondents (57.5%) received content either through the internet, satellite or 3G.

From the consumer point of view, the survey found that consumers’ experience of digital signage is set to become increasingly sophisticated as more touch screen technology designed specifically for the retail market is introduced. Currently only one in five retailers use interactive screens, but nearly half of those surveyed said they would install touch screen technology in 2011, with a further 25% considering it as a possibility.

Warren Lewis, sales director, LG Electronics told me “Retailers are becoming more sophisticated in their use of digital signage. They are beginning to realise that consumers are now expecting a more interactive experience. With the spread of touch screen mobile phones and tablet computers, many people have become used to using touch screens as part of everyday life. Interaction with visual media has become second nature to many, meaning they are more engaged with the material presented to them. Therefore, the use of this technology on digital signage is no longer being seen as an added bonus – it has become a necessity.”

Phil Day, business manager at POPAI UK & Ireland, said “This survey is the most accurate gauge of retail digital signage in the UK currently available and it shows that the use of this media technology is on the increase and becoming more sophisticated. Much has changed since the last survey was conducted in 2007 in terms of the economy and technology. Therefore, we broadened our scope to focus also on the types of screen being used and the latest technology developments.”

The report is available for GBP 299 (GBP 175 to POPAI members). To purchase a copy email ukdigitalsignagesurvey@dailydooh.com

This entry was posted on Saturday, January 29th, 2011 at 08:02 @376 and is filed under DailyDOOH Update. You can follow any responses to this entry through the RSS 2.0 feed. You can leave a response, or trackback from your own site.