The sun is up and it looks like it is going to be another beautiful day in Las Vegas. We are all set we think for for a fruitful day at #dse2011

Strange then when you meet most of ’em at a mixer and they collar you!

We are surprised at how many consultants are walking around with press badges and even more surprised that the dooh.com folks (who, based on past experience at InfoComm, walk the show floor trying to drum up advertising business) were given press badges as well – not seen an original article from those guys ever (just endless RTs of people;’s RSS feeds). That’s not journalism and not healthy for the industry – as fully paid up members of the National Union of Journalists we think we might lodge a formal complaint. 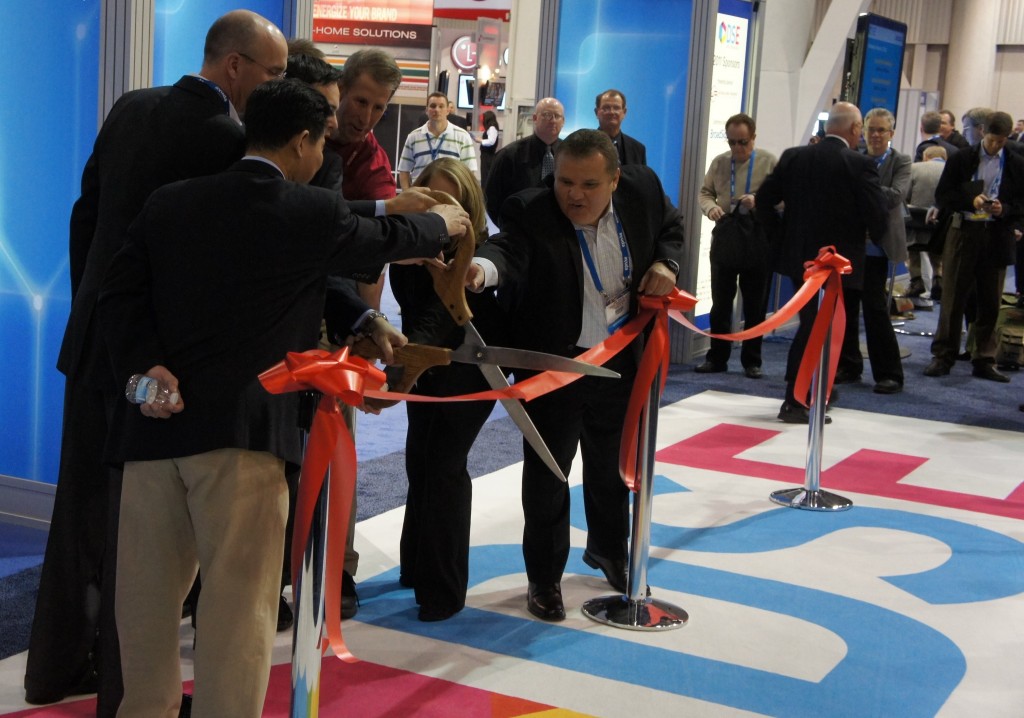 The show floor looked slightly smaller than last year during pre-build yesterday (nice stands from NEC, LG and Samsung though underpinning the entrance area) BUT was much better laid out than last year we think with everything in one place.

We didn’t get any thanks from Exponation for naming and shaming Haivision as one of the vendors not taking exhibition space (who then booked space) but instead booking a hotel suite to drag visitors too, so won’t name and shame any others BUT there are at least half a dozen vendors doing the same everywhere from the Hilton to the … (oh that would be telling).

Our day is pretty much a breakfast briefing courtesy of LG, a quick whizz round some stands, a couple of private meetings then we are over to the Encore for our OpenSplash industry kick-off before heading over to the Cosmopolitan for a FWI private cocktail party.

Christie have invited us to the awards dinner this evening – no doubt they and Arsenal Media are hoping to pick up some gongs. After that with a bit of luck we may be dancing at the top of the world (that’s the Stratosfear if you didn’t know).

This entry was posted on Wednesday, February 23rd, 2011 at 15:42 @696 and is filed under Scuttlebut. You can follow any responses to this entry through the RSS 2.0 feed. You can leave a response, or trackback from your own site.