Ayuda Media Systems, with Intel, is innovating with its ideas again!

The company is showcasing a concept demo with the integration of the Intel Anonymous Impression Metrics Suite into Splash, Ayuda’s flagship ERP system for DOOH networks, at Booth 1829. 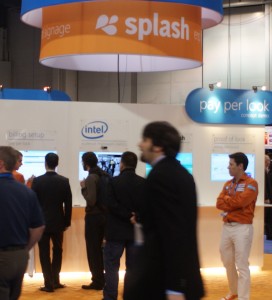 Dubbed ‘Pay-per-Look’, the concept will allow advertisers to be billed based on how many people actually looked at their ad, determined by using Intel AIM Suite technology. Intel AIM relies on optical sensors to detect faces that turn towards the display while completely honoring privacy.

“Technology allows us to create ever more meaningful ways to bring an advertiser’s message to the right audience,” says Andreas Soupliotis, CEO of Ayuda. “The future of ad sales might see network operators charge advertisers based on how many people actually look at an ad, as opposed to how many people are exposed to an ad, as is the case today.”

Pay-per-Look is a concept in ad-based advertising that will leverage audience tracking technology to track who has viewed the ad, and then bill advertisers based on the number of ‘looks’,

Current practice in the ad-based DOOH industry is to bill based on the number of impressions delivered. However, impression counts are typically based on audience measurement research that simply counts how many people are exposed to, or have the chance of being exposed to, an ad. The Pay-per-Look concept would take impression counts to the next level by counting people looking at an ad, as opposed to counting people passing by an ad. By combining anonymous audience detection technology with digital signage software, it becomes possible to detect exactly how many ‘looks’ each campaign received.

“This is a concept demo, much the same way car manufacturers demo concept cars at auto shows,” says Soupliotis. “While the Pay-per-Look concept is futuristic, it offers insight into a possible world where DOOH billing resembles the Internet’s Pay-per-Click success as proven by Google AdWords.” 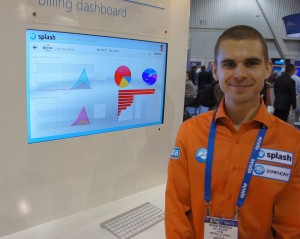 Richard Markiewicz with the Splash dashboard

Ayuda, developers of Splash, an ERP system for digital signage networks that includes content management software as well as a digital player, has been developing solutions for the OOH industry for over seven years and has invoiced over a quarter of a billion dollars in OOH billing.

The Intel AIM Suite technology will enable any network operator to detect, analyze, and audit audience measurement data, and have a clear picture of how digital signs are influencing audience behavior.

We shall be watching to see if, and how quickly, this concept catches on in the industry. As opposed to similar ideas that have raised questions regarding privacy in the past, this system that protects privacy may well have a much better chance of adoption and success.

This entry was posted on Wednesday, February 23rd, 2011 at 20:51 @911 and is filed under DailyDOOH Update. You can follow any responses to this entry through the RSS 2.0 feed. You can leave a response, or trackback from your own site.