Ah, hah! We were right! Just as we said a week ago, Harris Corporation has partnered with Digital Display Networks to accelerate a nationwide deployment of 7-Eleven TV. 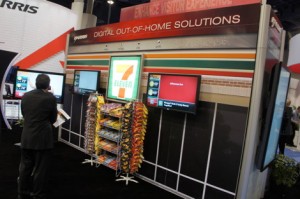 With this deal, 7-Eleven TV could become one of America’s largest broadcast TV networks, which, in full deployment, will be able to reach more than 200 million people per month

Under a 10-year agreement valued at $75 million, with additional revenue-sharing potential, Harris is providing its award-winning Digital Out-of-Home hardware and software, InfoCaster and Punctuate, in addition to its Managed Services offering to Digital Display Networks. DDN is providing turnkey services, as well as managing content production and advertising sales for 7-Eleven TV.

7-Eleven TV already is operating in 500 stores in some of the top DMAs and highest traffic volume 7-Eleven stores in the U.S., including New York, Los Angeles and Chicago. When fully deployed, it will be carried in 6,200 stores. Based on an analysis of various Nielsen ratings data, the GRPU (gross rating point units) of 7-Eleven TV will make it the fourth largest broadcast TV network when fully deployed.

“With its rich and consumer-relevant content, huge scale, and precise measurements, 7-Eleven TV offers precisely the qualities needed for a highly effective, high-reach and high-impact digital advertising network,” says Thomas Harrison, chairman and CEO of Diversified Agency Services, Omnicom Group Inc.. “It’s not just a vision into the future: it’s the vanguard of how new, high-ROI advertising channels will be shaped going forward.”

“Our aim is to offer 7-Eleven customers up-to-the-minute shopping choices at the point where they are making purchasing decisions,” says David Veckerelli, DDN’s co-CEO. “The Harris DOOH software makes this possible by enabling content programming to be highly targeted, right down to the zip code and profile of a specific 7-Eleven store, while providing sales metrics to endemic advertisers.”

“7-Eleven TV is an incredibly powerful new medium for both 7-Eleven and its advertisers,” said Harris Morris, president, Harris Broadcast Communications. “Our integrated digital signage network solution with its rich DOOH software, combined with our 24/7 managed network services – which are proven daily in the world’s most demanding production environments and live broadcast and live event venues – are driving 7-Eleven TV today, and are architected to expand with the network and support new applications, such as mobile and social media.”

Harris is building 7-Eleven TV around its InfoCaster DOOH software, which provides content creation, network management and media player monitoring with flexible proof-of-play reporting, and its Punctuate DOOH business management software for content scheduling and campaign management to facilitate advertising and scheduled distribution tuned to specific demographics, geographies, and day parts. The Harris DOOH software can manage 40,000 playlists, national and local ads, and all the software supporting transactions on a network.

Harris is supporting 7-Eleven TV with its Managed Services offering for 24/7 monitoring, data hosting and support via dedicated network operations centers in Dallas, Texas, and Melbourne, Florida. These highly secure networking services are similar to those used by major enterprises, from the new Amway Center in Orlando, Florida, to the U.S. Federal Aviation Administration.

“With the partnership of Harris, the nationwide deployment of 7-Eleven TV will become complete, and a milestone for the DOOH industry will be reached,” says Darren Mann, co-CEO of DDN. “This network truly signals the arrival of this advertising platform as one that can efficiently and effectively motivate purchases on a very large scale, not unlike broadcast networks.”

In addition to 7-Eleven TV, Harris technologies support enterprise-class DOOH networks for McDonald’s and the Amway Center in the U.S; the Marina Bay Sands integrated resort complex in Singapore; and the Venetian Macau Resort-Hotel, among others.

This entry was posted on Thursday, February 24th, 2011 at 03:55 @204 and is filed under DailyDOOH Update. You can follow any responses to this entry through the RSS 2.0 feed. You can leave a response, or trackback from your own site.