EuroShop 2011, the large trade fair for retailers held in Germany every three years had a strong Digital Signage presence, according to Nick Gale from Realisation. He went to the last two days of the show and undertook a bit of citizen journalism for us.

Gale reports, “Hall 5 at Euroshop in Dusseldorf was buzzing with exhibitors and over 100,000 visitors from 70 countries this week.  This show has a substantial Digital Signage element amongst the wide range of other retail merchandising on show.  Flights and hotel rooms were at a premium but on the plus side there was a lot to see and as ever it is a good way of catching up with people in the industry at the POPAI stand. 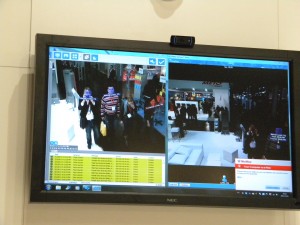 “I was impressed with the Xplace stand demonstration of the latest technology for customer viewing measurement systems which includes gender and age identification. Deadly accurate in my case.  The software is based on Spooks style high security military applications and is necessarily restricted.  A really useful marketing tool which will reveal a lot of data about customer behaviour and how they use screens.”

EuroShop was divided into four independent themed areas: EuroConcept; EuroSales; EuroCIS and EuroExpo. According to the organisers sustainability was a recurring theme across all areas. The show also saw a series of conferences in this subject, called ECOpark.

The EuroCIS area focused on further developments related to mobile devices, both for units operated by outlet staff and for customers’ self-scanning solutions and Smart Phone applications

“The scale of the Digital exhibition which was just one hall out of 17 is probably the best I’ve seen outside the US.  Make a note in your diary to go next time in Feb 2014.  Probably best to book a hotel room now if you don’t want to be forced to stay in Cologne like some idiots did – Oh that was me !” concluded Gale.

This entry was posted on Thursday, March 3rd, 2011 at 12:05 @545 and is filed under DailyDOOH Update. You can follow any responses to this entry through the RSS 2.0 feed. You can leave a response, or trackback from your own site.