I’m Switching Off For Earth Hour

Clear Channel in the UK reminded us that it is Earth Hour this weekend (and there’s us thinking that the only important thing happening on Saturday is Sri Lanka versus England in the quarter finals of the cricket world cup). 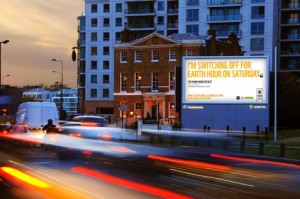 At 20:30 GMT on Saturday 26 March 2011, people all across the world are urged to switch off their lights to show they care about tackling climate change and protecting the natural world.

To support this, Clear Channel has launched new creative this week on its Digital LED network across London.

Creative has also appeared on Clear Channel’s Piccadilly Lite at Piccadilly Circus, on outdoor poster sites throughout the UK and on digital panels in shopping malls in March to promote this initiative.

Other Clear Channel regions are also providing space to promote this year’s Earth Hour around the world we believe.

Last year over 10 million people and 700 businesses took part in WWF’s Earth Hour in the UK alone and this year a record 131 countries on all 7 continents are taking part. In the UK hundreds of well-known landmarks including The Houses of Parliament, the London Eye, Edinburgh Castle, Old Trafford, Canary Wharf and the iconic lights at Piccadilly Circus, including Clear Channel’s Piccadilly Lite, will be switching off, alongside 750 landmarks across the world.

Katie Randerson – Head of Brand Communications at WWF-UK said: “Earth Hour has become a massive global event for us over the last few years. Of course it’s a challenge to get the lights switched out in major cities on a Saturday night, but a great sense of community develops as individuals, families, schools and organisations get involved in fun activities for Earth Hour. In WWF’s 50th year we want more people than ever to take part, show they care, and get involved as we look to the next 50 years.”

Earth Hour is also the focus of a Facebook campaign and fans have been gathering at an unprecedented rate with this year’s figures already at 37,076. WWF has also worked with Torchbox to develop an interactive online map to boost support for the event.

This year’s Earth Hour also forms part of WWF’s 50th anniversary celebrations as they seek to help people better understand the breadth of their work.

Deborah Meaden, Dragons’ Den investor and ambassador for WWF-UK said “WWF’s Earth Hour is a fantastic opportunity for UK businesses to take part in a truly global event to show that they care about our planet and tackling climate change. It’s more important than ever for companies to start taking action and work towards a greener future. Earth Hour is about more than just an hour; when the lights go back on let’s get together with our colleagues to think of even bigger and better ways to help look after the planet at work.”

Visit www.wwf.org.uk/earthhour to register and find out more.

This entry was posted on Thursday, March 24th, 2011 at 09:49 @451 and is filed under DailyDOOH Update. You can follow any responses to this entry through the RSS 2.0 feed. You can leave a response, or trackback from your own site.