Yorkshire-based Media Displays is helping the Welsh Labour Party to communicate its message to voters in the language that best suits them. 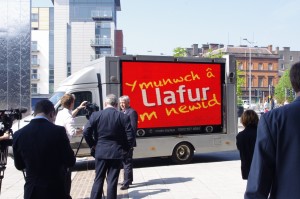 Media Displays, which supplies mobile digital ad vans, tv-bikes and tv-trailers, is running the Welsh Llafur / Labour Party’s first bi-lingual out door digital campaign. Leading up to the Local Elections and voting on the Alternative Vote, the campaign is aiming to win over Conservative and Lib Dem voters.

The messages appearing on the digital Ad-vans are also regionalised based on local issues.  For instance, as thousands of people flocked to the seaside over bank holiday weekend, Carwyn Jones, First Minster and leader of Welsh Labour Party, launched the digital Ad-van to campaign against the threat of closures to the coastguard stations in Milford Haven and Holyhead, demonstrating how to personalised a message at a target audience.

Ian Taylor, Managing Director Media Displays said, “The Welsh Labour Party are not only using digital TV Ad-vans to get targeted messages in to specific communities, but attracting potential voters by focusing on an individual’s native or preferred language.  This demonstrates how a party can strike with targeted messages to the right people at the right time”.

Carwyn Jones’s leadership helped deliver a decisive “yes” vote on the referendum on Assembly powers, “this is a Labour Leader who knows how to get results and decisively develop a personalised campaign which is likely to convince people to think carefully when  voting”, said Taylor.

This entry was posted on Wednesday, April 27th, 2011 at 10:00 @458 and is filed under DailyDOOH Update. You can follow any responses to this entry through the RSS 2.0 feed. You can leave a response, or trackback from your own site.