So, Just How Good Are Scala?

I’d always heard that Scala was at the top of the heap in its field, but it wasn’t until I attended Day One of its Connected Signage Conference in Philadelphia yesterday that I was really impressed at just how advanced Scala is and how dedicated the company is in striving to be able to offer the perfect digital signage solution to any company, no matter what its size. 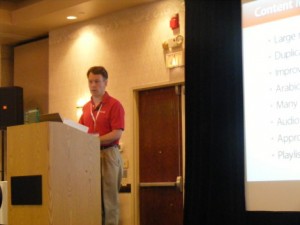 That sounds like strong praise, I know, but just listening to Peter Cherna, vice-president, R&D, outline the innumerable developments and improvements being readied for Scala 6, going into Beta testing next month before launch in Q3, and you’d likely be as wowed as others were, as well.

Among the aims of the conference are to bring various Scala partners together to not only learn what Scala is offering and how new developments might be used and sold, but also for these partners to learn about tools that could help their businesses, to learn from each other and, with peer-to-peer networking, perhaps help each other as partners in future projects.

Gerard Bucas, global CEO, opened the conference with a rundown of developments in recent years, including new products and its strategic partnership with HP. Bucas said that, while Scala had strong growth from 2003 and 2008, its 2009 revenues were down 8.5%, citing as reasons a drop in ad spending, a hold on large capital expenditures and a slow recovery from the recession in North America. 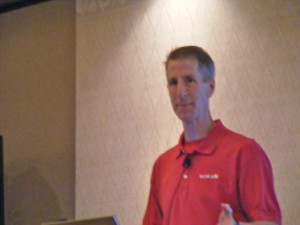 Jeff Porter, executive vice-president experts group, ran through the eight pillars of Scala strategy along with the company’s developments and acquisitions in recent years.

“We’ve moved from a ‘one size fits all’ mentality to offering something for everybody either in the market or wanting to break into the market,” Porter said. “We have many markets and price points, from a simple $20 a month all the way to a full package.”

However, as we learned later that, while many of Scala 6 features can be used with QuickStart, they can’t be used with Sign Channel, the entry break-into-the-market solution for small- and medium-sized businesses.

“Scala is redefining the industry,” Porter said. “It’s bringing digital signage to a totally new audience. It gives more opportunities to sell more things. Get them hooked early and grow with them.”

Most impressive was Cherna, who went through the development, improvements and enhancements in Scala’s next generation offering. While most of these were highly technical, the rich new visual effects involving shadows, outlines, blends, and texts were fun to see and easier for this writer to understand.

But one thing for sure is that everything that can be improved from the highly technical to simple visuals and typefaces will be made even better by the company that is obviously striving to be the best that it can.

This entry was posted on Wednesday, May 4th, 2011 at 07:15 @344 and is filed under DailyDOOH Update. You can follow any responses to this entry through the RSS 2.0 feed. You can leave a response, or trackback from your own site.

One Response to “So, Just How Good Are Scala?”