No More Fish In The Sea?

Project Ocean, a campaign that celebrates the beauty of the ocean and wants to raise awareness about endangered fish stocks, has got a new shop window in Selfridges in London. 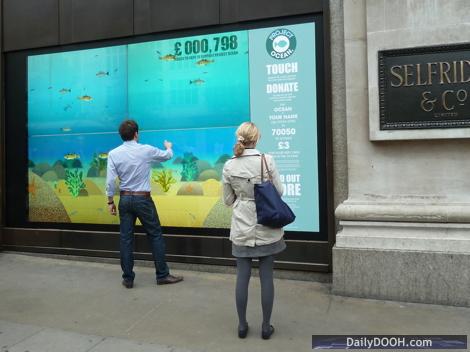 From 11 May – 12 June 2011, Selfridges is partnering with more than 20 environmental and conservation groups to highlight the issue of over-fishing, help people understand the threats to the ocean and make positive choices about the right fish to buy and eat. Selfridges is also highlighting its own responsibility as a retailer who does not sell any endangered fish in its Foodhall or restaurants.

The DOOH campaign was created by ad agency 18 Feet & Rising which worked with digital specialists Clusta to get passers-by engagement by using a mobile app, touch screen technology and by directing people to the campaign’s dynamic website.

The project is are also raising money for the Zoological Society of London (ZSL) to create Marine Reserves – protected areas in the ocean set aside as safe havens for fish and their ecosystems. Selfridges has already committed to set up a new reserve in the Philippines. We’re asking you to help ZSL set up more by donating to Project Ocean and buying our exclusive products.

The main 4m x 2m interactive window is based on a solution engineered by Paradigm AV, to support a 2 x 2 dnp (2800 x 2100 resolution) rear projection wall matrix. The four 80” dnp cross-prism screens, which make up the media display, the combination of custom software and Visual Planet foil, supplied by Paradigm and operating in real time, provides an advanced integrated solution. Users are able to engage with the ocean scene at street level, text donations and watch their fish being born in real-time as their donation is received.

“This was the first time we had worked with Paradigm and they supported the project throughout,” said Clugston. During that time the window spec was upscaled, and the original 10K projectors upgraded to the higher output Panasonic PT-D12000 SXGA+ 12K devices, fitted with 0.8:1 fixed-focus short-throw lens.

Paradigm also supplied the projection towers, projector mounts and mullion and screen frames for the display — as well as set-up and installation — and prior to commissioning helped arrange brightness and rig tests. The company also installed portable units to cope with the heat kicked out by the four projectors.

This entry was posted on Monday, May 30th, 2011 at 05:36 @275 and is filed under DailyDOOH Update. You can follow any responses to this entry through the RSS 2.0 feed. You can leave a response, or trackback from your own site.